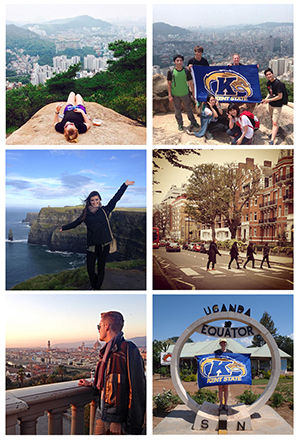 For some Kent State students, the desire to study abroad overseas or across the country has led them to participate in multiple trips.

Senior public health major Erin Schmitt who studied in  Italy, Guatemala and Colombia, said that she has traveled abroad to 15 countries.

Schmitt, who has an Italian minor, said she had a lot of interest in Florence from previous travels before college. She said studying abroad allowed her to take in as many cultural experiences as she could.

While in Florence, Schmitt said she found out that she would travel to Guatemala and Colombia with the College of Public Health to study tropical diseases.

“It was interesting to see the different levels of hospitals they had like private versus public and how much care was offered,” Schmitt said.

By living in NYC, Meinhardt said she worked with Rafael Cennamo, an eveningwear and bridal designer, as an intern in sales and marketing.

Meinhardt said that she knew she wanted to go to Florence and NYC before she attended Kent State.

“I like going outside of my comfort zone, and that’s why studying abroad really appealed to me,” Meinhardt said.

Nick Vasiloff, an education abroad and exchange student advisor, said that it’s not uncommon for students to want to study abroad or away multiple times during their college career.

Vasiloff also said that most students want a study abroad program with classes that transfer directly to their major or minor. This way, students are not running into the risk of delaying graduation. However, students can still go to a country they’re set on and take elective classes.

For junior fashion merchandising major Brian Castelucci, who studied in Florence with Meinhardt, said that he was recently accepted to study in NYC next semester.

“I want to work for a high fashion company, and I wanted to get two perspectives of working in high fashion,” Castelucci said.

What he enjoyed most about Florence was being able to travel on the weekends, he said.

During a class trip to London, Castelucci said he and his classmates went to Première Vision Paris, a global tradeshow for professionals and viewed a bridal exhibition called “Wedding Dresses 1775-2014” at the Victoria and Albert Museum.

Castelucci said that in fashion, it’s important to make connections, and he hopes to get an internship in NYC like Meinhardt did.

Amanda Bevington, a senior communications major, has studied in Africa, South Korea and has been accepted to go to Poland during spring break.

Bevington said that she went to Uganda over the summer because she’s passionate about service and wants to work abroad after graduation.

During that same summer, Bevington said that she decided to go on an independent trip through Kent State to South Korea to be completely immersed in the culture. While in South Korea, she was offered an internship to teach English.

Bevington, who grew up in a large Jewish community, said for her upcoming trip to Poland she wants to gain more knowledge on the Holocaust rather than work for service like her other two trips.

She said that these trips have helped students explore future places to live.

“I really had my mind set on going to Australia, but then when I started talking to advisors and other people around campus, I started to keep my options open more,” Bevington said.