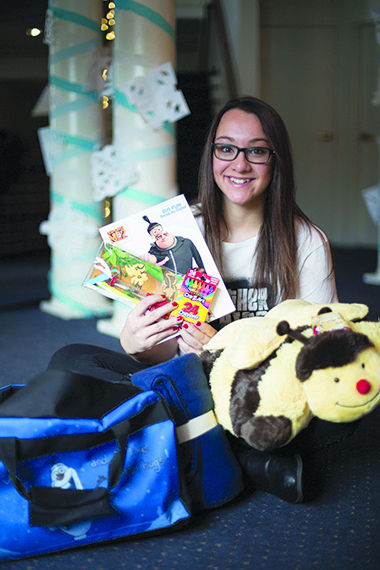 Editor’s Note: Parts of this story have been edited for clarity with further input from Keri Richmond.

She used to be known as Keri Hope. As a child, she moved throughout Ohio, in and out of foster care homes, school systems and residencies riddled with decadence and drugs.

As a college sophomore, she wears a fashionable scarf and glasses en vogue, sits as the Vice President of Philanthropy of the Panhellenic Council. One look at her now, it’s hard to tell where she’s been.

Keri Richmond, a public relations major, is one of the many college-aged adults in Ohio who grew up in foster care, a number that totals in the thousands. She is 20 years old, has her career path fine-tuned, along with a “milestone” birthday coming up in the spring. Yet she doesn’t want gifts. She won’t take them. Instead, she’s giving it all back.

Last November, Richmond was invited by Together We Rise (TWR), a foster care advocacy group based in Chino, Calif., to be a part of their social media campaign team. Looking to make light of her upbringing, Richmond immediately hopped on board and tackled a fundraiser geared toward improving, she said, “the little things” for foster kids, along with “helping them better navigate the foster care system.” The two, she said, go hand in hand.

She would raise money for “Sweet Cases,” care packages stuffed with everything from pillow pets to coloring books (replacing the “traditional” trash bag), for dozens of kids statewide. She was hopeful but unsure with the outcome. She set a modest goal: $500.

“I was just amazed,” Richmond said. “It began to get huge, and really took off. I decided then that I’d better go big or go home.”

She didn’t go home. Instead Richmond went much bigger, and come December 2014, she raised her goal to an impressive $4,000, enough to provide her customized, colorful duffel bags to 160 kids. She’s now just a few hundred dollars away from the oh-so-climatic date of March 11. That is, her 21st birthday.

With about 14,000 kids up to age 18 who are a part of Ohio’s foster care system, the statewide concern for the coming-of-age misguided tots and teens are in a shifty boat. According to the Ohio Association Child Caring Agencies, 36 percent of foster kids in Ohio have been imprisoned by age 19. A little more than half are without a high school diploma. As far as college aspirations go, the numbers shrink to miniscule. Richmond, it looks like, is a figure against the odds. She said she still has to convince others away from disbelief.

“People have come up and asked me, ‘How are you normal?’ or, ‘How are you not addicted to drugs?” Richmond said. “When you hear my story and look at the stats, it can almost seem that way.”

But Richmond and her TWR-sponsored mission has aims to go much further back, to when kids are most affected by misdirection, when they’re most vulnerable. Last year, Danny Mendoza, the head of TWR, spearheaded a Build-A-Bike nationwide campaign to deliver hundreds of bikes to kids about 5 years old with the goal to steer kids in a healthy direction.

Before she was 5, Richmond — the “rowdy, ornery” girl, she said she was — was placed in “the system” after her biological parents’ tumultuous split. At the age of 2, her father changed his mind. He won custody from the state, and Richmond moved back in. There was alcohol-fueled abuse. Neglect. Still while she was 3 years old, the home was deemed an “unsafe environment,” and back to foster care she went.

As she was driven from home to home, mother to mother, her few possessions, dolls, memories went along with her in a trash bag. Before her fifth birthday, she had named four houses her “home,” a quantity that she shrugs off upon recitation. She’s heard of kids who have been through 12.

She met her first adoption mother at an organized social for foster children in 1999. They hit it off after finger painting, and Richmond’s caseworker was brought in. Six months later, she switched homes for the last time.

Throughout her teenage years, Richmond’s rambunctiousness as a foster kid evolved and was put to the test. Despite being confronted with an environment of drugs and alcohol, Richmond managed to stay straight. She laid down her charitable roots with an anti-bullying campaign via Twitter, called Project Hashtag Love. The following year, plans for Kent State were made.

Her message to kids like her: “I’ve been through hell and made it out. And so can you.”

When foster care kids turn 18, they “age out” of the system and are responsible for finding work, housing and post-secondary education, if desired. Eighty-eight Primary Service Care Agencies (PSCA) exist around Ohio to facilitate the transition process for those in previous care (2500 in Ohio), which, Richmond said, rarely is a smooth operation.

“Once foster kids age out, they’re homeless, they fall into using drugs,” she said. “It’s because they don’t have mentors; they feel alone.”

Although foster kids like Richmond are on track to better days, others wane by the curbside. State-funded aid for those “aged-out” is only given to those with special needs, or the minorities, who will, one day, hold up a college degree. Despite the PSCAs, the rest are sort of just on their own.

In February, Pelanda and Grossman, the two primary sponsors of House Bill 50, brought such to the 131st General Assembly, legislation that would provide federal aid to Ohio foster kids until they turn 21 (under Title IV-E). With its proposed $4 million would come universal guardianship, along with a “bill of rights” for those of adult age. After meeting “aged-out” kids firsthand in Columbus — Ohio’s highest population of homeless youth — Grossman was bent on her proposition. She discovered that many “of age” weren’t well off.

“We found to provide every young person with a good foundation is necessary,” until 21, Richmond said. “It’s almost as if kids are pushed off the cliff when they’re 18 — and without wings.”

Back in 2008, the Higher Education Opportunity Act was brought forth to provide federal aid to adopted kids, and to “increase homeless and foster students’ higher education preparation, access and success.” Twenty-six states have either matched this federal program to age 21 since HEOA — Ohio discluded. It’s only up until 2015 that representatives like Grossman have been given another chance to persuade legislatures to implement the program. HB 50 is her vehicle.

Whether Richmond reaches her “Sweet Case” goal, she will still be donating time for kids alike to her past self. She wants to organize a “social” for foster children in the area, on behalf of her sorority, Delta Gamma. An internship with the Congressional Coalition on Adoption Institute in Washington, D.C. is in her sights for the summer. (Editor’s Note: Delta Gamma is not planning an official “social” event for this cause. Richmond said she would like to have a small event with members of her sorority to further her “Sweet Case” goal, but is not planning to host a event through the organization itself.)

As far as role models go, she’s off to a good start. Overall, what she wants to instill in youth pours from her like memories from her past.