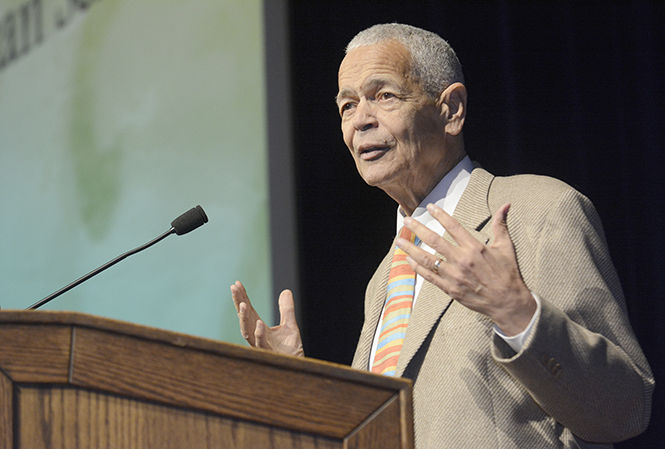 A civil rights activist who marched with Martin Luther King Jr. told a packed crowd at the Student Center Ballroom how people today should honor the dream of the fallen activist.

Members of the Kent State community gathered Tuesday to hear Julian Bond, a student and supporter of King’s, in honor of Kent State’s celebration of the leader.

Bond told the audience that one does not have to be an extraordinary leader to make a difference. He mentioned the efforts of the nine black students of Little Rock High School, a black farmer who came “here to die to vote,” the girls in the Birmingham Church Bombing, and three civil rights activists who went missing.

Alexus Huntley, sophomore pre-human development family studies major, said what stood out to her was how Emmett Till’s lynching in 1955 affected Bond, due to the two being close in age.

“A lot of schools don’t teach stuff like that,” Huntley said. “We don’t really talk about those kids like the female black student who was getting spit on by her white classmates.”

Bond told the audience that, although the efforts and tactics for improvements have changed, the goal has not.

“Instead of the time figure of King’s and Kennedy’s standing alone, we now see an army of anonymous women and men,” Bond said. “We see aggressive demands and the ethic of self-reliance and self-help.”

Throughout his speech, Bond joked with the audience on how he was one of King’s eight students. Because King only taught one class, Bond told the audience that it’s hard to believe those who say they’re students of the celebrated activist.

During the question and answer portion of the event, Bond encouraged non-blacks to do what they can to “erase the bigotry” from their friends if this bigotry is present.

“He inspired us to find out more about who we are as a people and how to unite with one another instead of standing against one another,” freshman digital sciences major Emanuel Jackson said.

During the event, E. Timothy Moore, an emeritus professor in the department of Pan-African studies, received the 2015 Diversity Trailblazer Award for all his work in the black community.

KSU Independent Films and Traci Easley Williams, School of Journalism and Mass Communication associate lecturer, teamed up in a film showed prior to the speech called “Our Voices.”

The film included excerpts from King’s famous “I Have a Dream” speech, Kent State seniors’ opinions toward King’s legacy today and a clip from Kent State’s recent student protest.