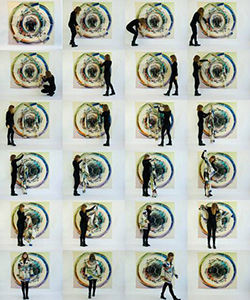 J.R. Campbell hopes to turn his background in digital textile printing into inspiration for the opening of his solo exhibit, “Wearable Spaces” at the Kent State School of Art’s Downtown Gallery.

“I’m playing with the idea of ‘how do you blend in?’” the Kent State Fashion School director said. “How are you part of your environment and how does clothing play in that conversation?”

Campbell said his designs span the past 10 years, with all of his pieces representing or referencing the idea of “wearbility” in some form.

His pieces in the gallery fall into three different categories of wearable spaces including architecture, geometric interpretations of space and a final category exploring interactive wall pieces.

“I’ve always been interested and involved in thinking about architecture, but also how we exist in spaces more than anything,” Campbell said. “One of the things that’s appealing to me as an artist is that we’re always wearing and always in contact with textiles.”

Campbell said he plans to incorporate video clips, which he said is rare, into his work as a main focus to his gallery.

One piece in particular was created as part of a research exhibition for a gallery in Dundee, Scotland, in which Campbell described as “where you can literally unzip the fabric from the wall, zip it back up to itself, and it’s a jacket.”

“Visiting galleries is a good source of inspiration and research,” Hall said. “You can learn about what is new and innovative for the future, so it’s really eye-opening to have a taste of other people’s creative visions.”

Hall said she feels the exhibit will be a way to look at how everyday people inhabit many kinds of environments and how clothes are another way of interaction around us.

Campbell said he took the opportunity to set up his “Wearable Spaces” downtown due to its locality, and said his designs are “not just garments or wall pieces,” which makes it hard to ship the pieces to other shows.

“The way I work as an artist is that I do reiterations of things and don’t worry too much if they are the perfect, final version of the idea,” Campbell said.  “Then, I keep working and do more. These pieces are all revolutionary.”

Junior fashion design major Lydia Dallas said she thinks visiting Campbell’s exhibit will be like viewing clothing that is also artwork at the same time.

“Being in design, it’s helpful to go to exhibits to pull inspiration for our own projects,” Dallas said. “His exhibit sounds interesting, and I always enjoy seeing similar designs (to Campbell’s) so it definitely will be worth checking out.”

As a student, Dallas said she plans to take a class next semester to work with the textile lab offered at the Fashion School and plans to incorporate textile design — as Campbell is using in his gallery — to include in her senior collection.

“You have a lot more room for creativity because textiles allow you to create a design to put onto the fabric however way you want it, and there are a lot of options,” Dallas said.

One message Campbell said he hopes to get across to the public is about the importance of learning about the application of digital textile technologies and that digital printing technology is a more environmentally sensitive printing process than any other type.

Campbell’s work has been shown in more than 70 national and international exhibitions, receiving twenty awards, according to the Fashion School’s website.

“Wearable Spaces” is free and open to the public.