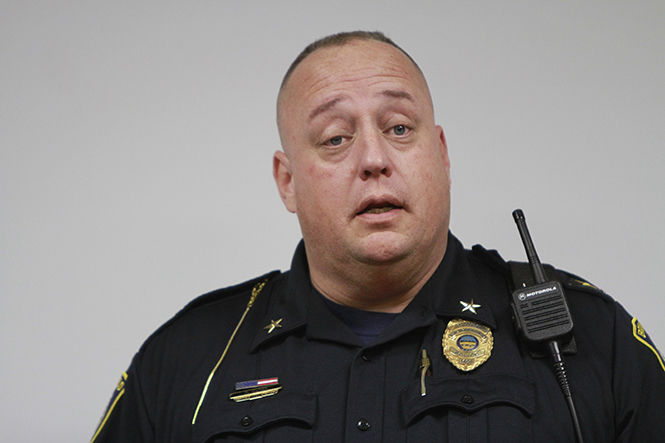 Brimfield Police Chief and Facebook "internet sensation" David Oliver speaks to Kent State students on Oct. 8, 2013 about his many experiences in the police force. From years of helping on the drug task force, to his more recent ones that revolve around helping the community through his notoriety on Facebook, Oliver has built quite a background for himself prior to the interest buzz. Oliver recently released a book called "No Mopes Allowed", inspired by the well-known Facebook page.

Oliver posted on his Facebook page, for which he has received national acclaim, “I cannot say a lot, with the exception that I am retiring as Chief of Police for Brimfield.”

In the Jan. 16 post, Oliver went on to refute the claims of harassment being made on local media sites were untrue.

“Folks, I am a hugger and a laugher,” Oliver wrote. “I have hugged every employee in that building more than once. I usually hug everyone I meet. I believe life is fun. People have stopped into the department from lots of different states for hugs.”

The announcement of retirement was made following speculation that the chief would be resigning sometime on Friday.

A report from the Akron Beacon Journal also stated there would be emergency meeting of the Brimfield Township Trustees has been called for Friday afternoon to take action regarding Oliver’s announcement.

Oliver posted that he plans to keep his followers updated on his next move, which he was “sure will not be in law enforcement.”

Brimfield Police Capt. Christopher Adkins, who was acting as Oliver’s replacement during the suspension, posted on the department’s Facebook page Friday stating there were things he couldn’t comment on and did not believe that Facebook was the proper medium.

“This is a page for the Brimfield Police Department and it is here for providing information to our citizens and to give them a forum to engage with their police department,” Adkins wrote. “The page will not be going anywhere; it is an asset. However, we cannot use it to its full potential if we are fighting through a war of comments and arguing amongst followers. With the way things have been going, reasonable concerns or questions will get lost in the crowd. Until we return to normal, please contact me or any one of our officers at (330) 673-7716.”

Check back on KentWired throughout the day for more information.