National Squirrel Appreciation Day: A tribute to the black squirrel 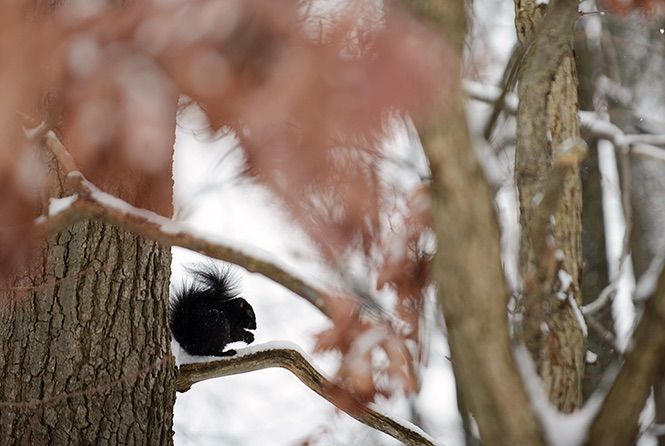 A black squirrel rests on a snow covered branch along Manchester Field on Monday, January 12, 2015.

They think I don’t notice, but I do. I see them sizing me and other acorns up from their perch in the oak tree. The swish of that shaggy tail may be cute to some, but I know what they’re capable of. I’ve spent too much time braving below freezing temperatures on this branch to be an appetizer. Just when I think I’m safe, they reappear, sporting a deceiving, innocent face.

Black squirrels weren’t always an everyday fixture on campus. I remember a time when an acorn could sleep easier. The squirrels, their unique hue the result of a genetic variation, were rare in the area more than 50 years ago.

Then-grounds superintendent Larry Wooddell changed all of that in 1961, when he became captivated with the creatures and wanted to ensure their survival. A colony of black squirrels living in Chardon had died out, leaving a sparse few scattered throughout Ohio.

M.W. “Biff” Staples, a retired Davey Tree Expert Co. employee and friend of Wooddell, had first spotted them on a business trip to Ontario, Canada. Wooddell worked with Canadian wildlife authorities to bring 10 squirrels back with him to Kent.

Once just a handful in number, black squirrels have thrived and can be spotted everywhere on campus. They have become so ingrained in the fabric of the university that they can be considered kind of an unofficial mascot.

Not a day goes by that I don’t see someone in a feverish attempt to chase after a black squirrel or try to snap a picture. Wooddell probably never imagined he was bringing back an animal that would one day become a commonplace charm.

There’s a darker side to our furry friends, however, that has almost been forgotten. Kent State used to be home to native red squirrels, but they were seen as a threat to their Canadian counterparts.

In a March 1961 article in The Daily Kent Stater, Wooddell accused the red squirrels of not permitting the newcomers to eat. He then carried out an operation to eliminate red squirrels with a .22 caliber rifle, or “the same instrument we use to get rid of pigeons.”

Jan. 21 marks National Squirrel Appreciation Day. Honor the chattering mammals that have become a kind of symbol for the university, but don’t forget the now-absent red squirrels that used to bolt across the grounds.

The National Wildlife Federation has some suggestions on how to observe the occasion. Squirrels tend to run out of food sources this time of year, so you can provide them with stale bread or dried corn for a yummy treat.

Today also coincides with National Hug Day. If you choose to commemorate both, do so at your own risk. I’m staying as far away from squirrels as I possibly can.