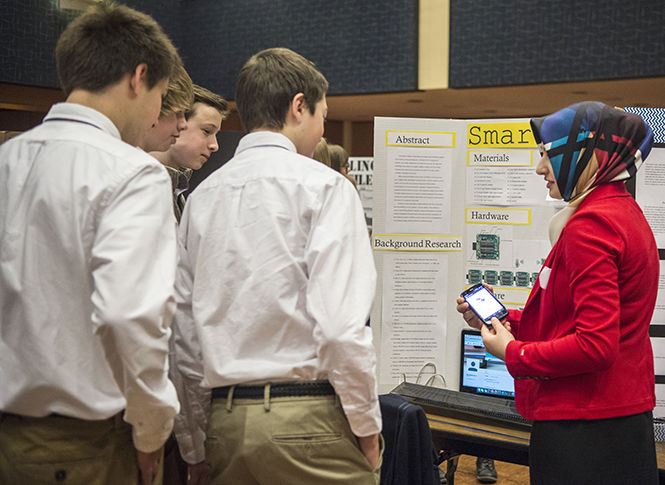 Zeynep Ozgur, 16, explains to a group of her classmates how her smartphone can be used to transfer messages to an LED light board during the STEM Science Fair event in the Kent State Ballroom on Saturday, Jan. 24, 2015.

The Northeast Ohio STEM (NEOHSTEM) Alliance is a nonprofit organization dedicated to promoting science education. The fair judged projects constructed by middle and high school students from school districts such as Hudson and Kent.

“The goal of the science fair is to promote interest in scientific subjects,” said Robin Selinger, a co-host of the science fair and chemical sciences professor. “When those students come to college, and I know many of them will come to Kent State, they will think about science majors.”

Edgar Kooijman, professor at the Department of Biological Sciences, also co-hosted the fair.

Contestants prepared their presentations on trifold presentation boards, displaying the information they’ve gathered on their subjects. Various subjects for presentation ranged from the perception of color when viewed by glasses to measuring the efficacy or usefulness of fingernail growth supplements.

Don Germano, director of policy for NEOHSTEM, said the science fair began when the NEOHSTEM Alliance found the need to expand its reaches beyond being a robotics club at Hudson High School. Aid from scientists such as Selinger has helped NEOHSTEM gain the support needed in order to host regional fairs, such as the Kent project fairs.

The eleven fields represented by the students’ presentations included subjects such as chemistry, zoology, biology and engineering. All represented had prizes sponsored by the various schools in the College of Arts and Sciences, Kooijman said.

Iulia Barbur, a seventeen-year-old Hudson high school senior, is a repeat contender in the science fair. “I started my first science fair in seventh grade,” Barbur said. “And my mom works in a lab, so before then, I was exposed to the lab setting and science and chemistry. I really like chemistry. I started to do a project, and it kind of worked from there.”

Her project for the fair focused around the issue of natural rubber latex antigens and residual chemical accelerators.

Barbur said she hopes to find the reason behind skin allergies caused by these materials in rubber gloves.

Due to her success in past science fairs, Barbur said she received enough scholarship money for a guaranteed free ride through college.

Selinger stated that NEOHSTEM Alliance plans to keep up the science fairs at Kent State every year, with more students potentially joining.