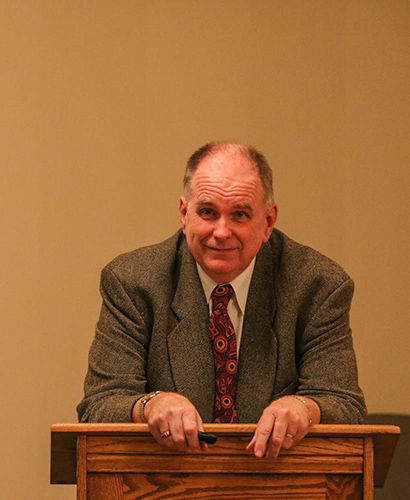 A Holocaust survivor’s story cannot be confined to the limits of film.

Paul Bartrop, director of the Center for Judaic, Holocaust and Genocide Studies at Florida Gulf Coast University, stressed to college students Monday night at the Cohn Jewish Student Center the importance of talking to Holocaust survivors about the genocide instead of using movies to get a false perception of reality.

“You are the last generation that will be able to say you spoke to someone who was there,” Bartrop said.

Students, faculty and Kent community members alike gathered to hear Bartrop present “Representing the Holocaust in Film,” where he gave examples of movies that portray the history of events.

Three specific titles he referenced were the 2004 German film “The Ninth Day;” 2001’s “Conspiracy,” a film chronicling how the Nazi’s Final Solution was devised; and 2008’s “Good, a film about the rising socialism in Germany before the Nazi party took power.

The night started with a greeting from Chaya Kessler, director of the Jewish Studies Program, introducing Bartrop, a resident of Fort Myers, Florida who moved to the U.S. from Melbourne, Australia.

“It’s nice to see from an educator how he would interpret movies,” said Adam Hirsh, assistant director of Hillel at Kent State. “It’s good to see movies that are lower on the radar.”

Bartrop provided the movies as examples and told attendees that movies can provide a sense of place and period for viewers but are only a window of understanding.

“Movie makers are defined by the limits of their medium,” Bartrop said. “Like Plato’s shadows on the wall of the cave, they show an image of reality but not the reality itself.”

Throughout the speech, Bartrop stressed the importance of younger generations getting a firm grasp and full understanding of the Holocaust, not by watching movies about it, but preferably by speaking to survivors.

Blaine Donaldson, a senior history major, asked Bartrop what the best medium was to learn about the Holocaust, if not film.

“What I took from this was my answered question,” Donaldson said. “It’s on my bucket list to speak to a survivor.”