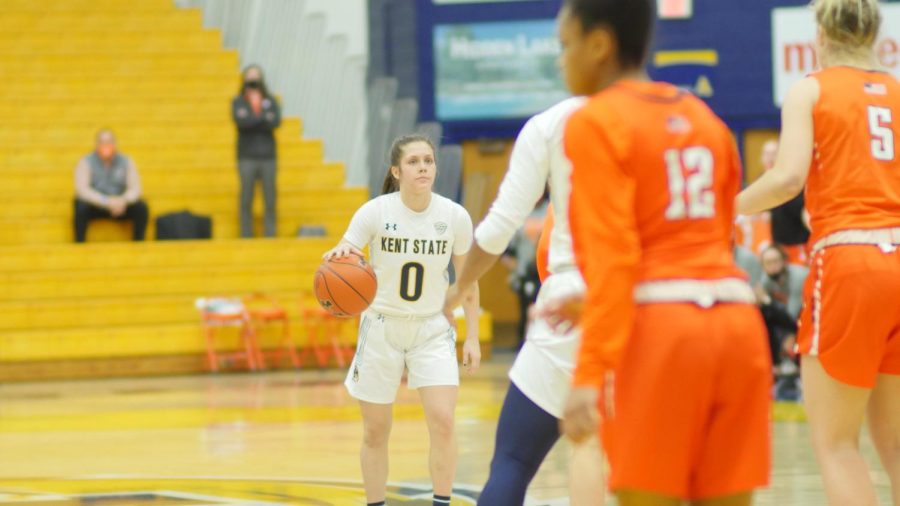 With two seconds on the clock in overtime, the Kent State women’s basketball team went back to sophomore forward Nila Blackford to win the game.

Blackford had scored the go-ahead bucket just eight seconds before, but after Bowling Green State University responded she was asked to do it again.

Blackford caught an inbound pass and drove inside, but was converged on by three BGSU defenders and her shot was blocked.

Coach Todd Starkey protested for a foul and the Flashes remained on the court, but the game was over, with Kent State falling to Bowling Green 80-79 for its first home loss of the season.

Kent State has played four games in just seven days, and went to overtime on Monday night with Toledo, winning 93-87, after nearly a month off due to COVID-19 protocols.

“For a bunch of 18 to 22-year-old young women, to go through this week and battle the way that they have, I can’t ask much more than that,” Starkey said.

With this loss Kent State (7-4, 6-2 Mid-American Conference) cedes the top spot in the conference to Bowling Green (15-4, 11-3 MAC) while the Flashes fall to fifth place.

Blackford has been critical for the Flashes in the last week, but showed no signs of wear tonight against the Falcons, scoring a season-high 23 points along with a team-high 13 rebounds for her seventh double-double of the season (three of which came in the last three games).

“[Blackford is] really aggressive, battling down in there, getting bounced around and finding ways to finish,” Starkey said. “The way things were going in the game was exactly why we went to her late. We just weren’t able to convert.”

The battle in the paint was intense as the Flashes fought for offensive rebounds, partially due to the team’s struggles shooting the ball.

Kent State shot 24 of 70 from the field, just over 34 percent. Bowling Green was much more accurate tonight, shooting 47.7 percent from the field.

The Flashes also struggled from the free throw line. Despite having 33 attempts, Kent State hit only 22 free throws, a rate of 66.7 percent.

“We can shoot the basketball better than we did and we have shown that,” Starkey said. “I think a lot of the shots we missed were just because we were leg weary and that has an effect. We got some good looks, but shots that were normally going in when we had fresh legs just weren’t.”

However tired the Flashes may have been, their hustle was still on display as the team chased down missed shots to come up with an impressive 20 offensive rebounds.

Many of those offensive rebounds came from Blackford, who had seven, but also chasing down the ball was junior forward Lindsey Thall.

Thall had seven rebounds, six of which came on the offensive glass, along with a season-high 18 points to be Kent State’s second leading scorer.

“We got [Thall] a lot more post touches,” Starkey said. “It is not usual for Lindsey to have 18 points and only make one three; I thought she did an excellent job being patient in the post and finishing down there.”

With Thall and Blackford leading the way, Kent outrebounded Bowling Green 46 to 34. However the Flashes struggled to turn those extra possessions into points, scoring 19 second chance points and being outscored in the paint 54-26.

“We probably need that to be more like 25 points on 20 offensive boards. Maybe that would have made a difference,” Starkey said.

Kent State leaned on its forwards, but several guards still played well bringing up the ball. Sophomore guard Katie Shumate scored 15 points and was one of the Flashes’ most effective shooters, shooting 50 percent from three-point range and going a perfect 5 of 5 from the free throw line.

Fellow sophomore guard Clare Kelly was coming off a career-high 27-point performance against Toledo, and though her scoring took a step back she was active all over the court.

Kelly scored 11 points and grabbed five rebounds, but combined four assists with a complete lack of turnovers to be arguably the game’s most efficient player.

“That was another good performance for her,” Starkey said. “That is when you start to really see progress in a player is when they’re starting to stack good games one after another.”

Kent State will have only a slightly longer break now, as the Flashes are back in action on Saturday, Feb. 13 at Central Michigan University (12-6, 10-4 MAC) at 1 p.m.