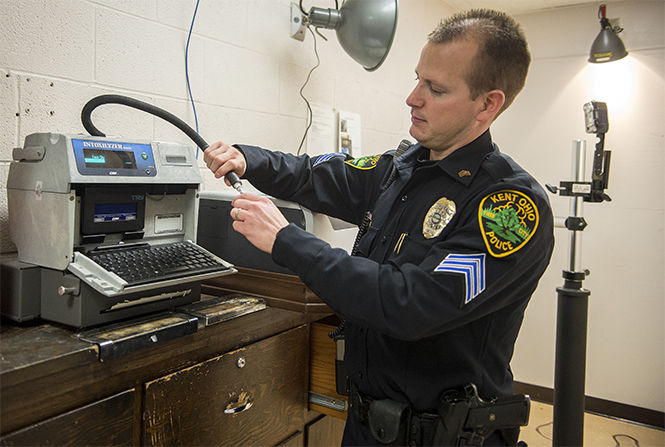 Sgt. Jason Short demonstrates how to work the Intoxilyzer 8000 Breathalyzer on Monday. Dec. 1, 2014 in the Kent City Police Station. The station does not use the machine, but in order to keep their permit they must test it on a weekly basis.

The City of Kent Police and Kent State University Police departments have stopped using a Breathalyzer device called the Intoxilyzer 8000 in response to defense attorneys disputing the device’s reliability under a new Ohio Supreme Court decision.

The Ohio Supreme Court ruled Oct. 1, 2014, that alcohol-related offenders could question the scientific reliability and proper operation of Breathalyzer devices.

Two years prior to the ruling, an estimated 135 appeal cases were brought to the 11th Appellate District Court in Portage County involving the Intoxilyzer 8000, said Dan Weisenburger, a defense attorney at Weisenburger Law in Stow.

Due to the controversy, other police departments in Portage County, including Brimfield, the Portage County Highway Patrol and Ravenna, have also discontinued their use of the device.

Lt. Jim Prusha of the Kent Police Department said the department officially stopped using the device this year after defense attorneys began having problems with it.

The department, however, still tests the device weekly to keep it up to Ohio Department of Health codes in case the device must be used in the future. To be in working order, the device must read a zero blood alcohol concentration during a test.

The Kent Police Department primarily relied on the BAC DataMaster for Breathalyzer tests before deciding to stop using the Intoxilyzer, Prusha said.

No alcohol-related offender tests by Kent Police have been conducted with the Intoxilyzer since 2011, according to Ohio Department of Health data.

Kent State University Police have not used the device since last spring when the police chief sent out an email to discontinue use of the device, said Officer Ralph Stover, who oversees the Breathalyzer devices.

“With the things that are in the courts right now and other issues that have arose out of (issues with the Intoxilyzer), I think that it is best to put it on hold,” Penn said.

Penn and Stover also said, to their knowledge, no Kent State police officer has had issues with the device.

University police administered the last offender test in March, and weekly tests have stopped, according to Ohio Department of Health data.

Portage County Prosecuting Attorney Victor Vigluicci said it is practical for the police departments not to use the device.

“The departments are spending a lot of time having their officers in court testifying about the machine,” Vigluicci said. “And it is easier for them to bypass the hassle of that by using the (DataMaster) breathalyzers they already have at the station.”

The Intoxilyzer 8000 was introduced in Ohio in 2009, after the state bought 700 devices for $6.4 million with federal grant money, according to the Columbus Dispatch.

The Intoxilyzer 8000 is a Breathalyzer device created by the breath alcohol testing device manufacturer CMI, Inc. in Owensboro, Kentucky, that runs tests based on infrared technology rather than fuel cell technology like other Breathalyzers.

Before the device could even be considered by the Ohio Department of Health, Alan Triggs, corporate counsel and compliance officer for CMI Inc., said the device had to be approved by the Department of Transportation.

CMI submitted the device to the National Highway Traffic Safety Administration to undergo at least three accuracy tests to be put on the conforming products list. Products on this list are considered accurate and safe to use.

After the device was approved by the Department of Transportation, the state was able to select the device and approve it for use in Ohio law enforcement.

“There are no issues (with the device),” Triggs said. “I can tell you, for sure, it’s been tested, tested and retested.”

Weisenburger said issues with the device’s reliability started with its history.

According to the Plain Dealer, Dean Ward, the Ohio Department of Health official who was in charge of outlining the specifications for Ohio Breathalyzers, had friends at CMI Inc.

The Plain Dealer further reported that out of 17 companies bidding for a contract with the Ohio Department of Health, only the Intoxilyzer 8000 fit Ward’s specifications. Ward said that his friendships at the company did not determine his Breathalyzer decision.

Defense attorneys, like Weisenburger, see this as a red flag since the device was already in question in states like Florida and Pennsylvania.

Ward, who now works at CMI Inc., was never investigated or charged with illegal or unethical activity, and the Ohio Department of Health continues to say the device is accurate without further testing.

The device still has not been completely adopted by Ohio police departments for the last five years and the device has been used significantly less than the other state approved device, the BAC DataMaster.

The Kent State University Police and Kent Police Departments records from the Ohio Department of Health indicate the departments didn’t start using the Intoxilyzer 8000 until 2011.

The Intoxilyzer 8000 could not legally be challenged until the Ohio Supreme Court ruling in October 2014 reversed the 1984 State v. Vega ruling, which prohibited challenges to the “scientific reliability” of Ohio’s approved breathalyzers.

How the Intoxilyzer 8000 works

1.) After an individual is arrested, the person must wait 20 minutes when he or she cannot eat, drink, burp, vomit or do anything else that might alter the reading before taking the test. During the 20 minutes, the officer will enter the individual’s information before handing the testing over to a different officer operator.

2.) The machine will start a self-check by drawing an “air blank,” in which room air is flushed through the machine to clear the sample chamber. Then, the machine performs a diagnostic test, an air blank, a reference check, a dry gas control (results must be .100 +/- .005), an air blank and another reference check. If the device does not pass the check, it will not turn on.

3.) The individual is given three minutes to give the first breath sample until they are out of breath to blow into the device.

4.) The officer enters more information, and the machine does a second air blank to flush the sample chamber.

5.) The machine will perform another air blank and reference check.

6.) The individual gives a second breath sample during a two-minute countdown until they are out of breath to blow into the device.

7.) The machine will perform another air blank, a reference check, a dry gas control and an air blank.

8.) Once two valid samples are received, the machine takes the lower of the two samples.

Information from Alan Triggs of CMI Inc. and the Ohio Department of Health Intoxilyzer 8000 Operator’s Manual

The new ruling happened after the Ohio Supreme Court heard the 2011 case Cincinnati v. Ilg, in which a Cincinnati man, Daniel Ilg, requested and was denied his BAC after his results were sent to the Ohio Department of Health from an Intoxilyzer 8000. Ilg’s operating a vehicle impaired charge was not dropped, and his attorneys continue arguing that his Intoxilyzer 8000 BAC results were inaccurate.

Weisenburger said the Intoxilyzer’s technology has proven flaws, and other defense attorneys claim it is based on faulty science.

He said flaws include test results so high it is not humanly possible to have that much alcohol in your system.

Another Ohio defense attorney, Charles Rowland of Cincinnati, said on his website, DaytonDUI.com, that the device creates a higher BAC from offenders blowing into the device for longer periods of time.

Both of these claims have not been officially proven false by the Ohio Department of Health since the device has already been tested and approved for use in Ohio.

“I don’t think the Ohio Department of Health has properly supported the machine,” Vigluicci said.

On Aug. 13, 2013, the Ohio Supreme Court appointed retired Franklin County Municipal Judge Teresa L. Liston to hear eight consolidated cases challenging Intoxilyzer 8000 test results, according to the Columbus Dispatch. Liston concluded that the Intoxilyzer 8000 was not scientifically reliable and prohibited its use in Franklin County.

However, no specific scientific evidence proving the device to be unreliable was released.

Portage County court hearings regarding the Intoxilyzer 8000 did not yield the same result.

“We’ve processed 56 appeals in Portage County from defense attorneys attacking the Intoxilyzer 8000,” Vigluicci said. “So for all of these 56 appeals, we have not lost one…and as a result, we have obtained convictions for OVI based upon Intoxilyzer 8000 results.”

The case State v. Titmas, heard in the 11th Appellate District, did not appeal Titmas’s case and left the scientific reliability of the device for the state to determine.

“I don’t think the training was sufficient on (for the Intoxilyzer 8000) nor was the department itself prepared to support the machine when these challenges came,” Vigluicci said. “The administration’s rules and regulations were not in place to support it. They didn’t have the manpower at the Ohio Department of Health to appear and testify when challenges were made to it.”