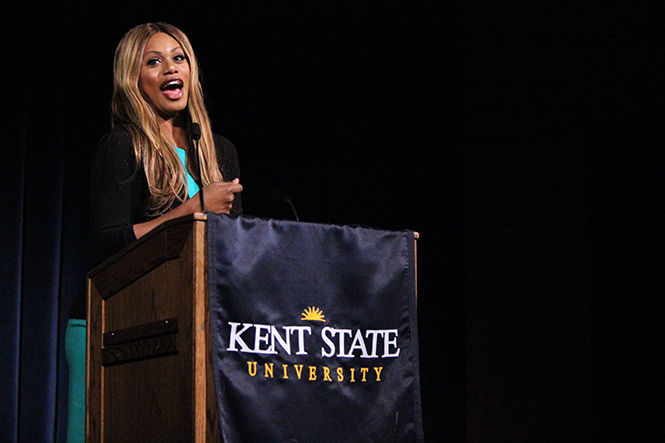 "Orange Is the New Black" cast member and transgender advocate Laverne Cox, speaks in Kent Student Center Ballroom for her “Ain’t I A Woman: My Journey to Womanhood” presentation on November 5, 2014.

Through the telling of her personal experiences with shame, suicide and hate speech, actor and advocate Laverne Cox told students the night of Wednesday, Nov. 5 that in order to become truly just and nondiscriminatory, society must first open itself up to love and healing.

“I charge each and every one of you to take risks, allow yourselves to be vulnerable and create a safe space for each other,” the transgender “Orange is the New Black” star said. “That’s the only way to begin accepting each other, to stop policing each other and to start healing.”

Cox delivered a speech titled “Ain’t I a Woman” to the full Kent Student Center Ballroom at 7:30 p.m. The speech was also live-streamed in the KIVA, which was filled to capacity, as well.

The title of Cox’s speech was taken from an address made by civil rights activist Sojourner Truth in 1851. Cox also pulled from philosopher Cornel West during her speech.

“‘Justice is what love looks like in public,’” Cox said, quoting West. “Trans- and gender non-conforming people could use some justice and some love today.”

“My third grade teacher called my mother and told her that if I didn’t see a therapist, I would wind up in New Orleans in a dress,” Cox said. “So I began seeing a therapist. And my therapist told my mother she needed to start injecting me with testosterone to make me normal. The worst part about it is I was willing to do it. I was willing to do whatever it took to stop being treated so badly and to stop feeling so shameful around my mother, my church, my teacher and my peers who bullied me.”

Though Cox’s mother did not inject her with medication, Cox said that her transgender identity caused her to act drastically.

“I started going through puberty; it was a very traumatizing time for me,” Cox said. “After my grandmother passed, I found myself in bed, imagining that my grandmother was in heaven looking down on me, that she knew every single sinful thought I was having. I didn’t want to live with the thought of her thinking ill of me, so I went to the kitchen, and I took and swallowed an entire bottle of pills, hoping I wouldn’t wake up. Even though I woke up the next morning, I continued to try to push down every abnormal thought I had.”

In a study of transgender youth, the University of California, Los Angeles reported in 2011 that 41 percent of transgender people have attempted suicide, nine times the national average.

Cox said that it wasn’t until her time in New York City that she began accepting her gender identity.

“I was in New York during the club kid craze, and I became good friends with a gorgeous queen named Tina Sparkles,” Cox said. “I watched Tina over the years go from being a gorgeous, glittery drag queen to being a stunning, statuesque woman. It was through watching women like Tina evolve that I found the courage to begin my own medical transition.”

Throughout her speech, the actress recounted several times hate speech was used against her as an adult.

“After years of personal experience, I firmly believe calling a transgender woman a man is an act of violence,” Cox said. “There is a subtext of hatred and a call to violence when you misgender someone.”

Cox recounted to the audience her personal experiences involving this kind of discrimination.

“Once at a deli in New York City, someone called out, ‘That’s a man.’ Then someone kicked me to the floor,” Cox said. “I’m lucky that’s the worst I’ve ever been physically attacked as an adult.”

The Huffington Post reported in April that within the first four months of 2014, more than 100 hate crimes had been committed against the transgender community.

From the audience, several students spoke about how they identify.

Mojica said that dissolving the idea of binary genders is the most pressing issue Cox addressed.

“I definitely used to think of things as black and white,” Mojica said. “I felt male one day and then more feminine another day. It wasn’t until I really began identifying myself that I realized I didn’t feel either way, that I just felt like a person.”

In addition to starring in “Orange is the New Black,” Cox is currently working on a documentary titled “Free CeCe,” which is about a transgender woman who was released from prison this year.