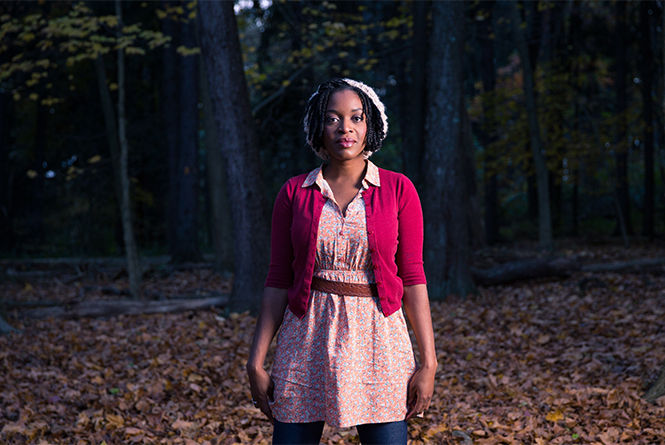 Musician Joy Ike frequents coffee shops and open mic nights, venues where one would be likely to hear acoustic guitars strummed alongside raspy harmonies. But her rhythmic piano playing and crystal vocals sound like they fit better in a jazz lounge.

Ike, currently living in Philadelphia, is on a fall tour across the East Coast and the Midwest, her latest stint since performing in the Kent ‘Round Town Folk Festival earlier this year. From art fairs to churches and cafes, Ike will be bringing her genre-bending sound to Scribbles Coffee Co. on Saturday, Nov. 8. Ike will perform songs off of her third and latest album, “All or Nothing,” a title best representing her attitude as a traveling musician and a sound prominently heard in her music.

Whether it be the ukulele-laden, peppy folk in songs like “Happy,” or a Norah Jones-like vocal melody in “No Matter What,” Ike’s music covers a lot of ground in the musical spectrum. She can be placed somewhere in the tradition of Regina Spektor or that of a contemporary Sharon Jones; she’s a Tori Amos, if Amos was born Nigerian. Her track “Everything You Have” shows off Ike’s skill as a creative songwriter, something she said is what brought her into a music career in the first place. She said her piano-laced sound is secondary.

“It’s a challenge for artists to make something sound new again,” Ike said. “Because there’s so much being created on a daily basis, and it feels like everything has already been said, I think it’s beautiful whenever you can find something and find a different way to say it.”

A part from Ike’s gift for truth-telling and her penchant for strong, faith-based lyrics, her real punch lies in her soul folk sound. She said the percussive stomping on the white-and-black keys is owed to her Nigerian folk roots, and the unavoidable sense to produce sound like that of a percussionist.

“I always tell people that I kind of feel like a drummer in a piano player’s body,” she said.

The reason Ike is often seen beating her barefeet — shoelessness being a necessity, she said — can be credited to family influence. Her father, a trained singer, was musically strict on Ike and her sister, Peace, along with her two older brothers. African instruments were common around the Pittsburgh household, along with the seriousness required to play them. She said forcing piano lessons on her as a teenager turned out for the better, especially when a career in music was never really on the agenda.

Three years out of college and working  as a publicist, Ike was at a standstill. She was doing weekend gigs around Pittsburgh, with occasional small tours around the state — mostly with the support of Peace, who plays the djembe, a West-African drum. She had bounced around the idea of becoming a full-time musician since her time in school, and when her 29-year-old brother, Blessing, passed away from cancer in 2008, Ike reassessed her life.

“It was a crazy several years in my family’s life,” she said. “To me, it felt more like a wake-up call. And everyone has that story that puts them where they’re supposed to be. But it’s true. These moments do end up shaping your life.”

They also shaped Ike’s first album, “Good Morning,” a very family-oriented lineup debuting Ike’s comforting vocal style. She soon caught the attention of NPR’s World Cafe, heard on All Things Considered and was named one of Pittsburgh City Paper’s “Best Solo Artists” for four years running. She’s recorded and produced several music videos, the latest being for “Everything You Have.”

Ike’s only direction, it seems, is up.

Her increasing success in the Pittsburgh — and now Philadelphia — circuit has shown her that trading in her career as a publicist wasn’t the worst idea for the 31-year-old.

“But it certainly didn’t make sense financially,” she said, laughing.

Spending most of November on the road, Ike said she doesn’t mind the day-to-day treks to coffeehouses or churches or the last-minute radio interviews, especially on a solo tour. It’s her belief in “something bigger than herself” that compels her across state borders, along with the joy that she gets walking into a cafe and sitting down at the piano bench.

Just don’t expect her to be wearing shoes.

“I guess I can just feel more of the piano with just by bare feet,” she said. “It’s weird when I’m wearing something on them.”

Editors note: Changes have been made to this article.