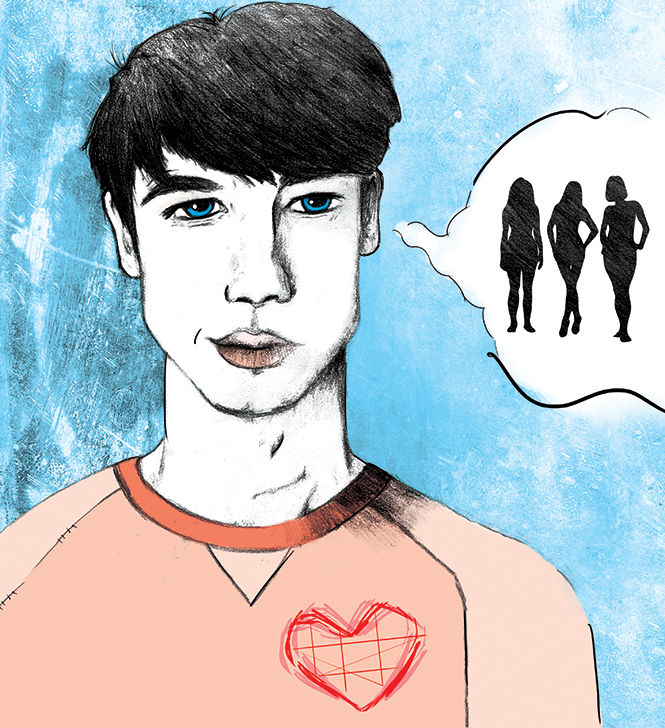 It used to be called a “little black book,” in which guys or girls stored potential sexual or romantic beaus, dreading any current partners ever finding out. The idea of collecting potential could-bes has pervaded our culture, has made it into shows such as Seinfeld and How I Met Your Mother. It’s the subject of the 2004 Brittany Murphy flick “Little Black Book,” whose leading character traces her fiancés past sexual romps to determine their relationship’s worth. Murphy’s character hits on the truth of the matter: “Knowledge is a terrible and marvelous thing,” she said.

Knowledge is a lot easier to privatize when we’re not dealing with PDAs and actual books. Today, we have what can be aptly named a little “blue” book: social media. Keeping “Rachel from the wedding in Akron” or “Steve the pharmacology major” under wraps from the rest of the lineup is as simple as clicking that tiny “X” next to his or her’s avatar.

What’s satirized in fiction has made its way into psychological research in the past couple of months. A February study published in Computers and Human Behavior labels these potential relationships “back burners,” that is, those whom one “keeps around” just in case his or her primary relationship falls flat. But not all potential hookups or significant others are back burners — just those who are kept in touch with, those who receive the text message at 1 a.m. reading, “So what are you up to?”

Jason Dribble and Michelle Drouin, the two psychologists who conducted the study, set out to prove Dribble’s hypothesis, that those in romantic relationships would keep less options open than their single counterparts. He surveyed 374 students at a Pacific University about their “back burnering” habits. And the research proved worthy: students reported having an average of 5 back burners. Guys expectedly boasted almost five more than girls (8 BBs versus 3), and 40 percent used Facebook for their dirty deeds. Even those in committed, romantic relationships said they had, on average, at least 4 partners to rebound to, if need be.

Of course, having a plan B, C, or even D, isn’t anything new, and has been around since humans have had the ability to consciously choose — and later on, ditch — their mates. It’s only in the last few decades that psychologists have studied this behavior seriously, with only some detailing how we manage back burners, rather than just why.

The “investment model,” used by Dribble in his study, was created by psychologist Caryl E. Rusbult in 1985 to explain why. It claims that partners in relationships deepen their commitment to their S.O. based on the level of happiness they receive from the relationship. Yet, as the model suggests, any alternatives that may be in someone’s bullpen can lower the attraction and diminish the bond. In short, if there is someone “better” available, there’s going to be trouble — hence why we have back burners.

Kent State students seem to think along the same thought patterns as those surveyed by Dribble and Drouin.

Sabrina, a freshman at Kent State, is open to the idea of keeping back burners. Although she’s off-and-on with a so-called “boyfriend,” Sabrina is intrigued by the single life and reps a line-up of potentials of her own. Being her first time away from home, she can’t help but find some excitement in exploring her own options.

“It’s what happens when you come (to college),” she said. “There’s just so many fish in the sea, and, I think we just want to try out all the fish.”

As far as social media goes, Sabrina agreed that Facebook facilitated the act of keeping a back burner — much more so than any other medium, such as Twitter. For her, deleting texts from over-prodding guys can be helpful and sometimes necessary. Some she blocks, specifically on the weekends.

How far does her back burner go?

Some, like Sabrina, hold onto the belief that guys are the champions of the back burner system. Although Dribble’s study asserts that guys have, on average, more back burners than girls — and are the ones often sending that late-night text — not all fit to that stereotype.

AJ, a junior at Kent State, said that although guys are more apt to collect back burners, he thinks the number game is various among individual guys. The “1-2” girls AJ cites as his own back burners are really just platonic friends, and, if the case — a little more than friends. He doesn’t think this is exclusive to males.

“Everyone just needs someone to fall back on,” AJ said. “No one wants to be the one going to a party alone.”

According to Dribble’s study, those in committed relationships aren’t safe from the behavior. Especially for those hopping around from fling to fling, back burners will come in handy along the way. This is what surprised psychologists like Dribble the most in his study — “the total number of back burners were not significantly related to commitment or investment in one’s current relationship partner.” In short, commitment can be somewhat difficult.

For that reason, some just keep the burners off.

Sydney Booker, a junior finance major, said that she strays away from keeping alternatives, and rather “focuses on one guy at a time.” Although Booker thinks that guys rack up back burners “so they (have) options,” she said that girls, on the other hand, keep a list mainly as a “response” to a male habit.

More concerning to Booker is the distance of the relationship over text and Facebook. She sees it almost as a problem, as something that may even undervalue the now-prized act of the actual date. Booker said she would rather just go to a nice restaurant and have some honest, heartfelt conversation than play games over a phone or computer.

“I like to feel the vibes that someone gives off — get able to know you,” Booker said. “And it’s hard to feel that from text messages.”

Although Facebook might make the picking-and-choosing game a lot more accessible, there is other research that states that social media is actually a promoter of solid romance. Jeffrey Child, associate professor of communications studies at Kent State, said that his time spent studying how people manage relationships via Facebook shows that social media “will not replace actual dates” and can “deepens bonds.”

“The way you use that medium reflects your goals,” he said. “But when you’re married and you have kids, you’re not going to use social media for hookups, or potential back burners. If you do, I’ve got news for you: You’re a really risky type of person.”

What Child calls a “developmental” thing rather than something specific to an age is something he knows is common to all of those single-and-ready-to-mingle. From recent divorcees, to late 20-somethings, having potential S.O.s on the back burner is a way for anyone to soften a heartbreaking blow. Social media, he said, is just a medium used to bounce back into the game.

“Especially when you’re a college student and the permanency of some of your relationships is a month to three,” he said. “Now that’s a whole different story.”