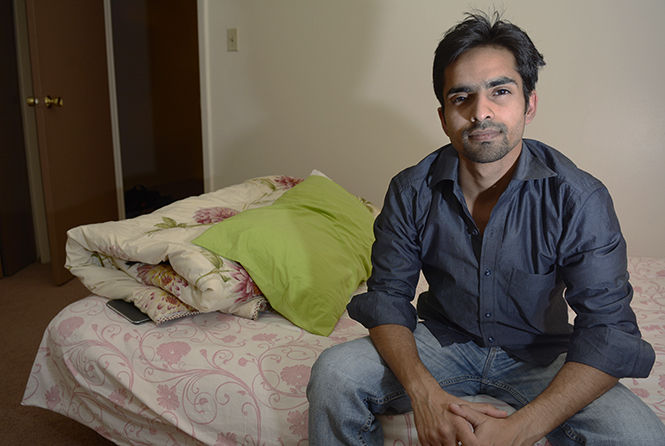 When Shirish Bhatnagar, a graduate finance student from India, first chose to study at Kent State, he planned to live on campus.

But campus housing shortage forced him to search for lodging off campus before he’d even stepped foot on American soil.

Off-campus housing filled up rapidly as well. Bhatnagar, who began his housing search while he was still at home in India, found himself bunking in a local couple’s home before finding an overpriced apartment and pressing charges against the roommate he found on Craigslist, all during his first three weeks at Kent State.

Finding housing off campus can be challenging for the average domestic student, but finding a home away from home can be even more stressful for the average international student, as they encounter early housing deadlines, language barriers and little guidance from the university.

“People who are arriving just three days before the semester starts, they cannot just adjust so fast,” he said. “They don’t know how the local system of how to do things and how to go about things. When it comes to looking for housing, this is just a lot to expect.”

Bhatnagar originally wanted to stay on campus, but he said the university’s Department of Residence Services wasn’t able to accommodate him because undergraduate students, who receive priority on-campus housing, had filled the dorms to capacity.

“Living off campus wasn’t my first choice,” Bhatnagar said. “When you come across from a different country, you want stability when you get here. You don’t know anybody, you have a lot of luggage and you don’t even have a local phone. You don’t know how to get anywhere you need to go and you have limited currency, so it’s preferable to live on campus for at least one semester.”

Bhatnagar said he began looking for off-campus housing three months before arriving in Kent, but that wasn’t early enough. The properties he looked at, including Eagles Landing, Ryan Place and College Towers, were full.

“We’re expected to find a place by ourselves before we arrive here,” Bhatnagar said. “This didn’t really work out for me because for one week I was without a house. “

The university offered him a temporary 15-day stay in the dorms, but Bhatnagar said he spent a week with a family he met at the International Friendship conference until he found permanent housing.

A university representative recommended Silver Meadows apartments, recently renamed the Villages at Franklin Crossing, a three-mile walk from campus, he said. Desperate, Bhatnagar rented a three-bedroom apartment there all by himself, paying approximately $1,800 for his security deposit and rent for two months.

Even worse, Bhatnagar said, Silver Meadows Boulevard, where The Villages at Franklin Crossing is located, is known for its high crime.

“It’s a shady area,” he said. “Whenever I invite my friends there, their cars get tailed by cops.”

Looking to reduce his monthly rent payment, Bhatnagar said he posted an ad for roommates on Craigslist, asking the first person who responded to his ad to move in.

But, Bhatnagar didn’t research his new roommate’s background, and soon realized he was dangerous.

“I eventually had to throw him out of my apartment with the help of cops, and he started threatening me with stuff like, ‘I’m going to kill you,’ so I had to press charges against him,” he said. “This was too much for me during my first weeks at Kent State.”

Each year, Kent State releases enrollment statistics on the fifteenth day of fall semester classes. This year’s showed that of the 6,176 undergraduate students living on campus, only 177 were international students.

This year’s housing deadline was the earliest it’s been in years, Church said. Residence Services put students wanting on-campus housing on a wait list, which it returned to at the end of July, offering everyone on the wait list housing.

“We didn’t necessarily deny anyone housing, but some students who didn’t want to be on the wait list probably looked into off-campus options,” she said.

If a student reaches out, the office contacts different complexes to check for openings, recommending complexes near campus, Mihalyi-Jewell said.

“From there, finding a place is up to the student,” she said. “If they go ahead and do it right away or not, it’s on them from that point. We can’t reserve it for them and we can’t hold their hands to go there and ask for additional information, but we do try to equip them with the proper information.”

“We make sure no one is sleeping on the street and find places that are at least close to around where the buses go,” Mihalyi-Jewell said. “We’ll look from home to home and from ad to ad if necessary to be able to place every student in housing.”

While OGE can help students who come to the office with housing concerns, this isn’t the department’s main goal, Mihalyi-Jewell said.

“We help with immigration and cultural issues,” Mihalyi-Jewell said. “We also help with housing, but we are not a housing replacing office.”

There are other campus resources, like Residence Services, whose job it is to provide housing information.

“We do not want to reject the students if they need help in connection with housing, but at the same time, Residence Services and other people on campus can help with housing questions,” she said.

Home away from home

Although finding a home off-campus is a challenge for some international students, some, like Scott Tang, a sophomore from China majoring in global communication, are lucky enough to find lodging without much hassle.

Tang said he and two other Chinese students got a good deal on a house off of East Summit Street, and everyone is content with the living situation.

“One of my roommates saw a posting of the place on the information board in the Student Center and contacted the landlord,” Tang said.

Bhatnagar still lives in his three-bedroom apartment but with two roommates, with whom he feels comfortable.

After the obstacles he encountered, Bhatnagar said he thinks the university should help international students set up living arrangements before they arrive in Kent in order to prevent future students from experiencing housing difficulties similar to his.

“For future reference, just find a place for students,” Bhatnagar said. “Otherwise things like this will keep happening all the time.”

Editor’s note: Due to a reporter’s error, this article incorrectly stated the amount of money Bhatnagar paid for each month’s rent. Bhatnagar actually paid approximately $1,800 total for his security deposit and rent for two months.