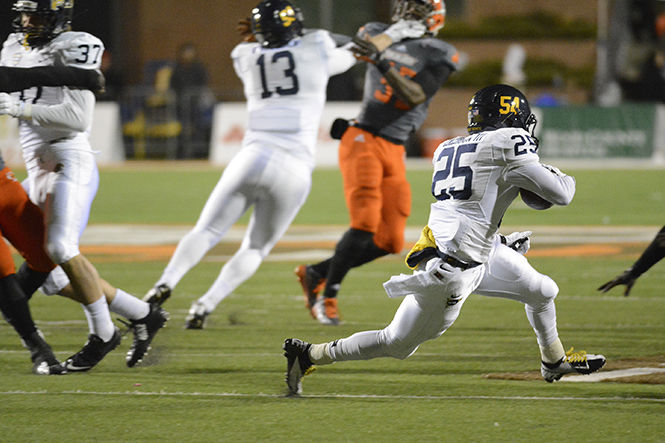 The Kent State football team aims to bounce back from last week’s discouraging 20-30 loss at Bowling Green State University and pick up its second win of the season in what will be the second-to-last game at the University at Buffalo on Wednesday night.

“We have a lot of young guys who are going toe-to-toe with the best teams in the league,” Kent State coach Paul Haynes said. “We continue to fight. We continue to have the right attitude. This is going to be a great program.”

In last week’s loss to Bowling Green, the Flashes were inconsistent and fell behind, 0-20 in the first half, but the team still only lost by 10.

Haynes decided to start redshirt freshman quarterback Nathan Strock over sophomore Colin Reardon, but Strock’s struggle to move the ball on four possessions caused him to be replaced by Reardon.

As Strock did against Toledo on Nov. 4, Reardon provided a much-needed spark for the Flashes’ offense, finishing the game 24 of 37 for 284 yards passing and three touchdowns.

Sophomore Nate Holley hit the 15-tackle mark for the fourth time this season in the Bowling Green game, finishing with a game-high of 17 stops, according to kentstatesports.com. He has led the Flashes in tackles in 9 of 13 career starts.

Sophomore Elcee Refuge had a career-high 12 tackles against the Falcons. He also forced a fumble in the fourth quarter.

The Flashes’ 306 passing yards against Bowling Green were their second-most of the season, as were their 21 first downs.

Junior Nate Terhune had 1.5 of Kent State’s two sacks versus the Falcons. It was the first time in eight games the Flashes recorded two sacks.

Five Flashes had 10 or more tackles against Bowling Green.

Kent State’s 20 points scored against the Falcons were the most in five road games this season.

However, four second-half interceptions doomed Kent State late in the game when the team needed a boost the most.

“When you make that many mistakes in one half of football, it’s just too much to overcome,” Haynes said.

It’s difficult to win a football game when your quarterback throws four interceptions in the second half, something Reardon has struggled with all season, and he must find a way to take better care of the football.

“We said if they are going to put press defense on us one-on-one with no safety over the top, let the playmakers go make plays, and Colin had faith in us,” Pierce said. “We said, ‘Hey, throw it up. We are going to go after it.’ I kept telling him and Chris that one of three things was going to happen. It’s either going to be pass interference, a catch or we are going to bat it down.”

If the Flashes can figure out a way to take care of the football, they will start to win more games. With only two games left on the season, however, time seems to have run out on this disappointing season.

The Flashes will have their hands full with a very stout Buffalo team. The Bulls are coming off of a 55-24 routing of Akron and will look to produce a similar performance against the Flashes.

Wednesday night’s game will be available on ESPN U and will kickoff at 8 p.m.