Protesters swarm Statehouses across US; some evacuated 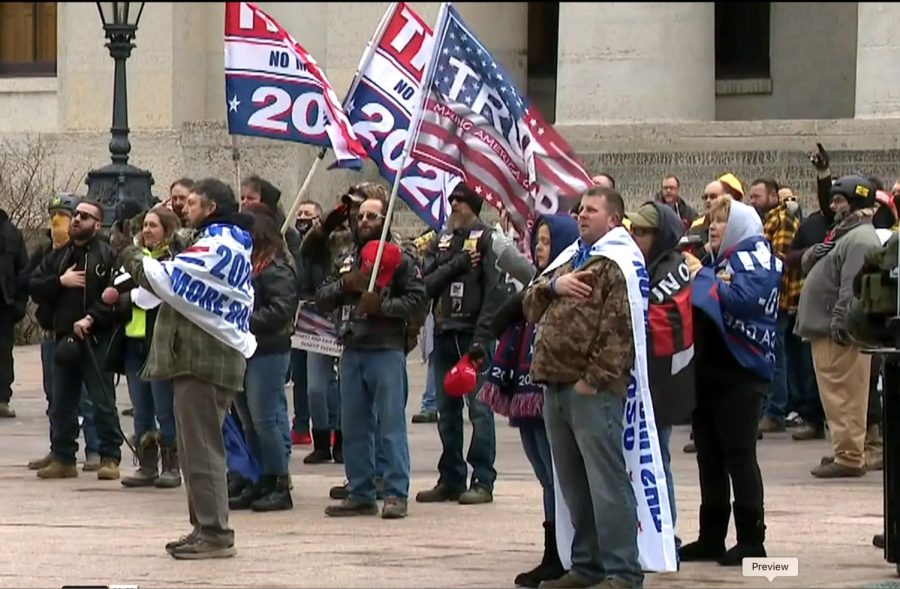 Supporters of President Donald Trump gather in front of the Ohio Statehouse in downtown Columbus on Jan. 6, 2021 to protest the certification of the election results in Washington D.C. Protesters there breached the Capital grounds and had to be cleared from the U.S. Senate chambers.

SANTA FE, N.M. (AP) — Protesters backing President Donald Trump massed outside statehouses from Georgia to New Mexico on Wednesday, leading some officials to evacuate while cheers rang out at several demonstrations as a pro-Trump mob stormed the U.S. Capitol.

Hundreds of people gathered in state capitals nationwide to oppose President-elect Joe Biden’s win, waving signs saying “Stop the steal” and “Four more years.” Most of them didn’t wear masks amid the coronavirus pandemic, and some carried guns in places like Oklahoma, Georgia, Arizona and Washington state. There were some scuffles with counter protesters in states like Ohio and California, and a newspaper photographer was pepper-sprayed by a protester in Utah, but most demonstrations were peaceful — some of them quite small — and only a few arrests were reported.

New Mexico police evacuated staff as a precaution from a Statehouse building that includes the governor’s office and the secretary of state’s office, shortly after hundreds of flag-waving supporters arrived in a vehicle caravan and on horseback.

Demonstrators sang “God Bless America,” honked horns and wrongly announced on a megaphone that Trump was the rightful election winner — though Biden won the vote in New Mexico by a margin of roughly 11%.

“It’s the first time in the history of the United States that the peaceful transfer of power has been slowed by an act of violence,¨ Democratic House Speaker Brian Egolf said. “It is a shameful moment, and I hope that the Congress can recover soon.”

Violent protests in Washington, D.C., came as Congress tried to affirm Biden’s Electoral College victory. News that protesters had breached the U.S. Capitol set off cheers at pro-Trump protests in Minnesota, Nevada and Arizona, where armed protesters marched at the Capitol in Phoenix and several men displayed a guillotine.

Georgia’s secretary of state and his staff evacuated their offices at the Capitol as about 100 protesters gathered outside, some armed with long guns.

Republican Secretary of State Brad Raffensperger and his team decided to leave, according to Gabriel Sterling, a top official with Raffensperger’s office.

Trump has focused much of his ire on Raffensperger in the weeks following his loss by about 12,000 votes.

Republican Gov. Brian Kemp slammed the storming of the U.S. Capitol, calling it “a disgrace and quite honestly un-American.” Kemp said he was extending an executive order from protests over the summer activating the National Guard in case they are needed to protect the state Capitol on Monday when the legislative session begins.

In Washington state, protesters broke through a gate at the governor’s mansion and dozens of people gathered on the lawn. The crowd, some of whom were armed, repeated baseless allegations of election fraud. The State Patrol said authorities were responding and that Gov. Jay Inslee “and his family are in a safe location.”

Earlier, dozens of people gathered at state Capitol, demanding a recount of the U.S. presidential election and Washington’s gubernatorial election, which Inslee, a Democrat, won by more than 500,000 votes. The Statehouse has been closed to the public for nearly a year due to the pandemic.

In Utah, the staff of Gov. Spencer Cox was sent home as several hundred people gathered in Salt Lake City, Lt. Gov. Deidre Henderson tweeted. Salt Lake Tribune photographer Rick Egan said he was pepper-sprayed by a demonstrator who taunted him for wearing a mask and shoved him as he was shooting video of the protest. It wasn’t immediately clear if anyone was arrested.

At least one person was arrested at the Oregon Capitol on suspicion of harassment and disorderly conduct as police in riot gear tried to get people — many of them armed — to leave.

Video showed protesters and counterprotesters clashing and riot police moving in. But by midafternoon, only a few dozen people remained, their American flags and Trump banners drooping in the rain.

In Topeka, Kansas, chants of “Stop the steal” and “No more masks” faded as a rally ended and Trump supporters filed peacefully into the Statehouse building through security checkpoints, milling around historical exhibits.

In Colorado, Denver Mayor Michael Hancock ordered city agencies to close buildings after hundreds gathered in front of the Capitol building for a protest against the election results.

In South Carolina, protesters supporting Trump came to the Statehouse but left before the U.S. Capitol was breached.