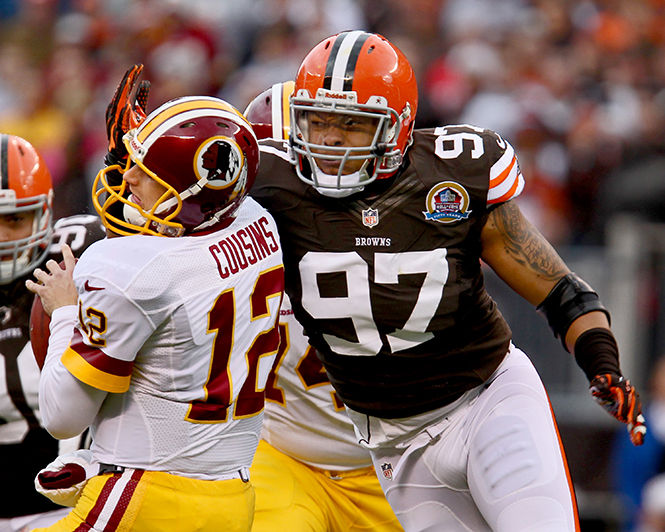 BEREA, Ohio (AP) — The Browns’ defense has taken two more major hits, blows that could knock them from playoff contention.

Cleveland could be without starting linebackers Karlos Dansby and Jabaal Sheard for the remainder of the season after both sustained significant injuries during Sunday’s loss to the Houston Texans.

Dansby injured his left knee on a running play in the second quarter and coach Mike Pettine said Monday that the 11-year veteran will be out for “upwards of a month,” and it’s possible he could be done for the year. Dansby, who signed as a free agent with Cleveland in March, leads the Browns (6-4) in tackles and has been a leader on and off the field.

Sheard’s foot injury could be more serious and his season is likely over. Pettine did not give specifics of the injury other than to say it involves a bone in Sheard’s foot.

“There is a possibility he could be done,” Pettine said.

The losses of Dansby and Sheard, who will be an unrestricted free agent, further hurts Cleveland’s defense, which lost run-stopping end Phil Taylor to a season-ending knee injury last week.

Dansby has been remarkably durable during his NFL career. He has never played fewer than 14 games in stints with Arizona and Miami.

“It’s a shame,” Pettine said. “He’d been playing at a high level and it is more than just the playing and his ability on the field — it’s how he’s been in the meeting room, locker room, out on the practice field just the intensity, the energy, the leadership, it’s all part of it.”

Pettine said linebacker Craig Robertson will take over calling signals for a defense that has been decimated by injuries. The Browns are already missing Taylor, defensive lineman Armonty Bryant (torn knee ligaments) and John Hughes (knee). Ahtyba Rubin and Billy Winn have been slowed by nagging injuries all season.

The Browns gave up 213 rushing yards in Sunday’s game, and without Dansby and Sheard Cleveland’s inability to stop the run could make it tough for them to make the postseason.

With Sheard’s future uncertain, it’s possible he’s played his final game with the Browns, who drafted him in the second round in 2011. He has 36 tackles this season and two sacks while adjusting to another new defensive system under Pettine and coordinator Jim O’Neil.

“He had some good games for us, and yesterday, he was another bright spot,” Pettine said. “I thought of all the outside backers, he played the best. I think maybe he struggled picking (the scheme) up, some of the graduate-level details of it early on, some of the technical stuff, not so much the learning, but the technique part of it. But as he became more and more comfortable with it, he improved, and his recent games were his best football.”

With Sheard sidelined, former first-round pick Barkevious Mingo will start opposite Paul Kruger. Mingo has had some nice moments with the Browns, but maybe not enough to justify his selection as the No. 6 overall pick. In fairness, Mingo has been slowed by a shoulder injury, which has required him to wear a harness and kept him out of one game.

Pettine hinted that Mingo may need to undergo offseason surgery, but credited him with playing despite being limited.

“The kid’s been tough enough to push through it,” Pettine said. “There are some guys who potentially would have shut it down, but he’s pushed through it. Given our circumstances now with Jabaal, he will have to step up and take a bigger role.”

Copyright 2014 The Associated Press. All rights reserved. This material may not be published, broadcast, rewritten or redistributed.