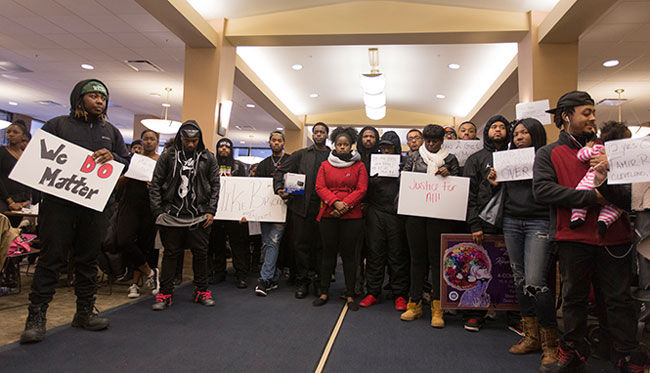 BUS holds a peaceful protest in the Student Center on Tuesday, Nov. 25, 2014, in response to the grand jury decision not to indict Officer Darren Wilson for shooting and killing Michael Brown.

Kent State’s Black United Students have prepared a “walkout” for Tuesday afternoon in response to the grand jury decision to not indict white police Officer Darren Wilson in connection with fatally shooting Michael Brown in August in Ferguson, Missouri.

Members of BUS sent out tweets and Instagram posts Monday night advertising that the whole campus wear black in mourning over the decision. Social media posts say students plan to walk out of classes to congregate at the Student Center at 12:30 p.m., fill empty seats and stand next to those already sitting down.

BUS members then plan to move the organization’s office from the Student Center to Oscar Ritchie Hall. From there, they plan to march to the Kent Police Department.

Marvin Logan, executive director of the Undergraduate Student Government, is participating in the walkout.

“I feel that after our rights are violated or justice isn’t there, it is our civic duty to stand and be counted,” Logan said.

After the announcement of the grand jury’s verdict, more than a dozen buildings were charred and set on fire in the city, as protesters took the streets of Ferguson to express rage over the decision.