Victory for John Kasich at the polls 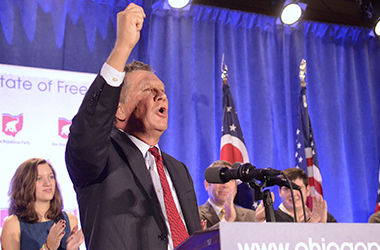 Governor John Kasich celebrates his reelection with a roaring crowd at the Ohio GOP watch party in Columbus on Tuesday, Nov. 4, 2014.

At 7:34 p.m. on Nov. 4, just minutes after the closing of the polls, John Kasich was declared the projected winner of the 2014 Ohio Governor’s race by the Associated Press.

According to vote.ohio.gov, the official website for Secretary of State Jon Husted, Kasich was re-elected Tuesday in a 61.33 percent to 35.62 percent vote tally over Democratic candidate Edward FitzGerald and Green party candidate Anita Rios.

The Columbus Dispatch projected in its Nov. 1 poll that Kasich was on track for an “epic victory,” leading the polls at the time by 28 points, 62 to 34 percent, over FitzGerald.

Except for the four years of Democratic Governor Ted Strickland, the Ohio gubernatorial seat has been held by a Republican since George Voinovich was elected in 1991. Just a few years later, Voinovich set the standard for largest margin of victory in the Ohio governor’s race with 72 percentage points.

Kasich’s platform was touting the success of his first term in office. Under Kasich, the unemployment rate statewide dropped 3.4 percent, a figure below the national average. He also added an additional estimated 244,000 jobs.

In his first term as governor, Kasich took a controversial stance on the Affordable Care Act, commonly known as Obamacare. Agreeing with the president on the portion that expanded the Medicaid program in Ohio, Kasich went against typical party lines to fight for policy he claimed would benefit Ohio.

Critics has said his kind of “toeing the line” is the kind of policy decision a candidate looking to run for president would do. It has also drawn criticism from fellow Republicans.

Despite any negativity in the campaign, Kasich’s projected outright win in the polls has him in position to claim the 2014 Ohio Governor’s race.