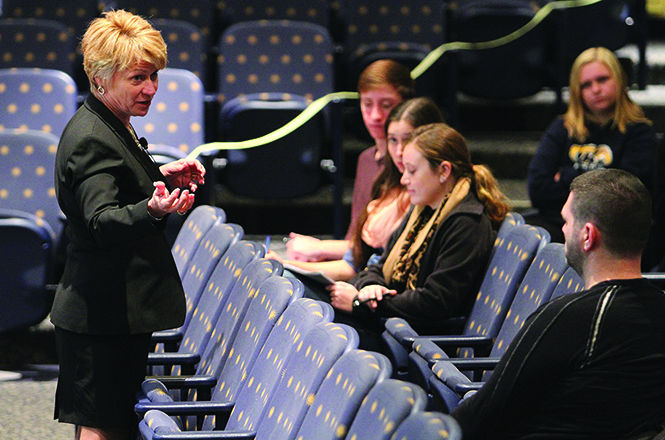 Kent State President Beverly Warren talks with students during her Listening Tour in the Kiva Thursday, Nov. 13, 2014. Warren wanted to find out what Kent State means to students and what needs to improve.

“Well, we really are awesome,” said Warren, who is looking for feedback from the Kent State community on what needs to improve at the university.

Warren has held 52 Listening Tour sessions so far, but she said that number will rise to about 65, despite the original objective of 50. She said two of her top priorities are increasing student success and global competitiveness.

Valerie Oppenheim, a freshman journalism major, said she was drawn to Kent State because of the university’s tagline, “Excellence in Action.” She said the university stays true to that motto because, as a freshman, she has had the opportunity to get involved right away.

“As a freshman, you don’t necessarily have to wait your turn,” Warren said in response. “You get to jump in there and be as involved as you want to be right from the beginning.”

Another student who transferred from China said she came to the U.S. for the first time this semester to try something new. She said at Kent State, she’s not required to take English as a second language, but she still struggles with English and would like more opportunities to learn.

In response, Warren said the university is trying to increase its international student numbers and involvement.

“I do think that trying to make sure that you feel supported so that you can study, you can get the support you need,” Warren said. “And I think all of us can only imagine what it’s like to pursue a degree in another language.”

One of Warren’s last questions to students was about what they wanted Kent State to improve upon by 2020.

Some of the responses included increasing sustainability and recycling, expanding facilities, such as the Recreational and Wellness Center, and boosting overall Kent State pride.

Warren’s personal response included two factors. First, the Esplanade should work two ways: students use it to go downtown, and now the university should focus on how to get the community onto campus. Second is making sure students receive practical experience while in college in order to be ready for the future.

Warren also asked how students would feel about a smoke-free campus, to which students responded positively.

Warren said she plans to use her Listening Tour sessions as a platform to begin making progress in the spring. She will be hosting more events in New York, California and Arizona beginning Nov. 17.