Flashes look to get it together, topple Army in homecoming game 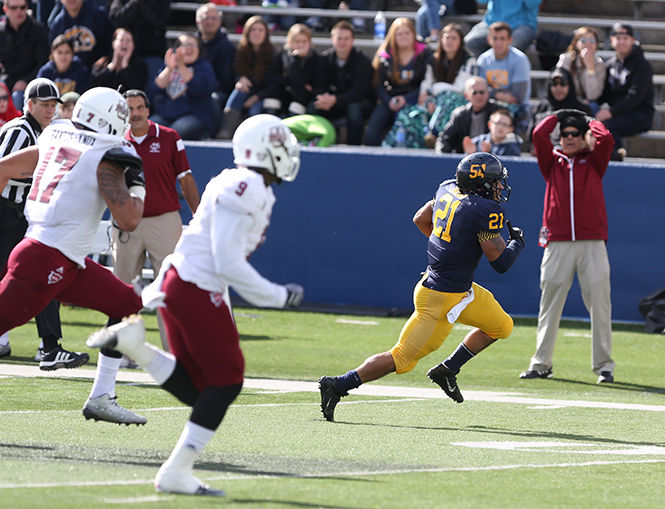 Senior running back Anthony Meray runs down the field at the game against the University of Massachusetts on Saturday, Oct. 11, 2014. The Flashes lost, 40-17, bring their season to 0-6.

Where the team stands

It is now eight weeks into the 2014-2015 college football season, and the Kent State football team is in trouble.

Last Saturday at Dix Stadium, the Flashes (0-6) self-destructed in the fourth quarter against the University of Massachusetts and ended up falling, 17-40.

The team will take the week to prepare for its homecoming game this Saturday at Dix Stadium against Army at 3:30 p.m.

“These guys are out here practicing hard, and trying to get a win,” Kent State coach Paul Haynes said. “We know a win won’t happen without us working hard.”

Army is an old-fashioned football team, leaning heavily on pounding the football on the ground to open up the passing game for the offense. The Black Knights have already knocked off two Mid-American Conference teams earlier this season by beating Buffalo and Ball State.

Kent State must be able to stop the run this Saturday if they want to have a chance of beating the Black Knights.

What: KSU vs. Army football game

Last Saturday against Massachusetts, Kent State sophomore quarterback Colin Reardon seemed as if his ankle was still bothering him. Reardon limped around in the pocket for most of the day but still managed to play the whole way through.

“My ankle feels good,” Reardon said. “It’s a little bit sore, but I’ll be fine by Saturday. It was in my head I was playing all last week. We had a plan if I could practice a little bit Thursday then I would be good to go.”

The decision to start Reardon against Massachusetts came on game day, and was a decision made by Haynes.

“The decision for kids to play is always my decision, so we decided to play him, and Colin does give us the best chance to win,” said Haynes.

Reardon still feels that this season is very well alive and all the Flashes have to do is go out and execute in the last six games to achieve its goals.

“We have a lot to play for still, because we can still win six games in a row,” Reardon said. “We have a couple good teams left on our schedule and if we win out we could possibly make a bowl game.”

Two bright spots for the Flashes on the year have been the play of the Holley twins, Nick and Nate. Nick at the running back position and Nate, who plays the safety position, have been two leaders on and off the field for Kent State this season.

“I don’t think many people understand it’s a great bond between two guys,” said Nick Holley. “When you’re twins, you’re especially close. It’s great to play with him, and it’s cool to cheer him on while I’m on the sidelines.”

The brothers were almost faced with the scenario of playing on different teams against one another at one point while they were being recruited.

“It’s great being able to play with Nick,” Nate Holley said. “We didn’t know coming into college whether we wanted to be on the same team or if we wanted to play against each other. Ultimately, our decision to come to Kent State was because we both got offers here. Originally I wasn’t going to come if I didn’t get an offer, but now that we’re here and we’re playing on the same team it’s great. I wouldn’t want it to be any other way.”

Nate has received national recognition this season, ranked as one of the nation’s top tacklers and winning the MAC East Defensive Player of the Week award twice, but that isn’t exactly what he’s looking for.

“To me, I would rather be winning, but it’s pretty cool to be ranked in the nation in tackles,” Nate Holley said. “Being named defensive player of the week is a great honor and feeling. I couldn’t win the award without the other guys on defense, and so I credit a lot of that to them.”

According to the athletic department, for every single ticket purchased for the homecoming game this Saturday against Army, Kent State athletics will donate a general admission ticket to local military veterans for the Golden Flashes’ game against Toledo on Nov. 4. The tickets are Kent State’s way of thanking all of those who have helped sustain this country’s freedom.

“It’s always an honor to play our military academies, and this gives us a great opportunity to recognize those who have served or are currently serving in the armed forces,” Director of Athletics Joel Nielsen said. “We look forward to providing an exciting atmosphere at Dix Stadium for those soldiers, veterans and their families.”