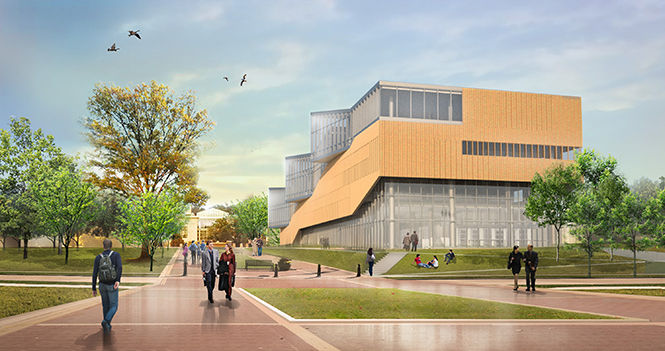 Kent State students will soon be able to see the modern and efficient benefits of the new architecture building as construction starts with the official ground breaking Friday.

The university received 37 entries of internationally recognized architecture firms for a contest to decide who will design the new building. Design team Weiss/Manfredi won the contest and designed the 107,000-square-foot building for Kent State, according to a press release.

“It provides another link between the city and the university,” said Douglas Steidl, the dean of the College of Architecture and Environmental Design. “It’s a significant one, and it brings all of our students together under one roof. In the design professions, peer learning is extremely important.”

Currently, architecture students on different class standings are spread out and don’t work and have class in the same building.

“The college itself is uniting four or five separate facilities of students all under one roof which will bring the cultures of the years together,” said Aaron Kanapesky, senior architecture major. “First-year freshmen will be able to talk to seniors.”

“I think it also sets a tone for Kent State saying we are about the future,” Steidl said. “This building is about things that stand for sustainable design, for energy conservation, for practice models that will make the community a better place in the future.”

Steidl said the building has geothermal heating and cooling, rain water recirculation and reuse, and there will be a rain garden with surface runoff that will refilter the water. These features will benefit the university by helping it to be more energy efficient.

“This is going to be a signature building right along the esplanade,” said Emily Vincent, the director of the university’s media relations. “And as you come to Kent State from that direction, this will one of the first things that you see of the university.”

The building will be built along Kent State’s Esplanade directly across from the Wick Poetry Center.

Kanapesky said the location for the university is good but for the students, it isn’t. Most of all the dorms are located at the opposite end of the university, and it’s a very far distance, especially for underclassmen because most of them live on campus.

The building will be a part of the program, Foundations of Excellence: Building the Future. This is a program that Kent has to revitalize the university and keep up with the modern technology.

“I think it’s a good choice for something visual but the building itself could work a little bit better on the inside,” Kanapesky said. “I think it was more designed to look amazing than for the space to work out as well as it could have.”Steidl and Kent State President Beverly Warren, along with Marion Weiss and Michael Manfredi, the cofounders of Weiss/Manfredi, will be speaking at the ground breaking this Friday.