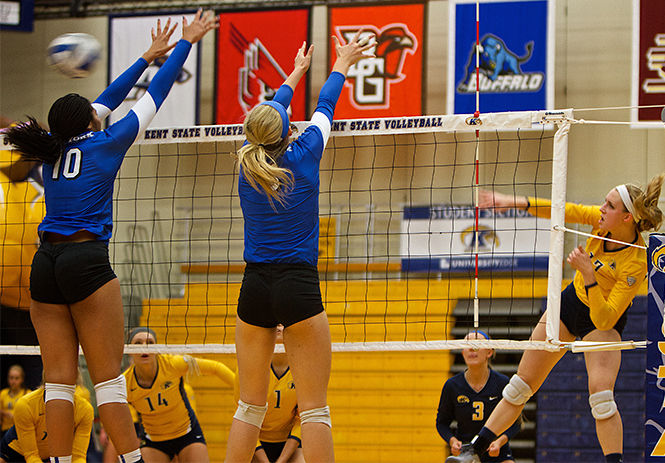 Kelsey Bittinger, outside hitter, hits the ball against the University at Buffalo to gain a point at the game Saturday, Oct. 4, 2014. The Flashes won 3-0.

Kent State experienced both ends of a blowout Friday and Saturday, as the team dominated the University of Toledo in three sets but fizzled out against Ball State University.

“We’ve got to look at ourselves as a program,” coach Don Gromala said. “When we’re playing teams that are as physical as us, that’s when we struggle. When we play teams that I think we’re more athletic or more physical than, we’re taking care of business.”

In their second-to-last weekend road trip of the season, the Flashes (11-10, 3-5 MAC) opened up Friday in commanding fashion, defeating the Rockets (1-19, 0-7 MAC) through a resurgence of offensive play.

Led by senior outside hitter Tinuke Aderemi-Ibitola, who finished with 12 kills, Kent State managed 42 kills to Toledo’s 30. The Rockets never challenged the Flashes in the first set, but did manage 15 ties in score and six lead changes. Ultimately, the Rockets’ 26 hitting errors and .034 hitting percentage cost them the match in a 25-15, 25-22 and 25-21 blowout.

“We had some good matchups physically,” Gromala said. “(Tinuke) versus her blocker was good, and we passed the ball well.”

The weekend did not end on happy terms for Kent State, however, as Ball State (12-9, 6-2) welcomed the Flashes to Indiana Saturday with an assertive three-set sweep. The Flashes’ defense never adjusted to the offensive power in senior middle blocker Hayley Benson and sophomore outside hitter Sabrina Mangapora, and the offense couldn’t spark any big runs in a 25-13, 25-18 and 25-23 loss.

“When you play a good team like Ball State on the road, it’s hard to be down 2-0 and make up for it,” Gromala said.

Junior middle blocker Liz Reikow paved the way for a paltry offense that hit a collective .110 in the match. Reikow racked up 11 kills, and Aderemi-Ibitola added another six.

“Teams aren’t going to catch up to teams that are hitting .400 for two sets,” Gromala said. “That was our block and our floor defense. It was a combination of everything. We’ve got to come out every match and play at the same level.”

The Flashes return to the MAC Center next weekend to square off against Northern Illinois University and Western Michigan University. Kent State won’t take the road again until Nov. 7, as six of the final eight matches of the season are at home.

“We’ve talked (since) day one (about) playing consistently, and we haven’t had it on the road,” Gromala said. “I don’t know how we can expect it to happen next week at home. We’re going to be playing good teams that physically match up well with us.”