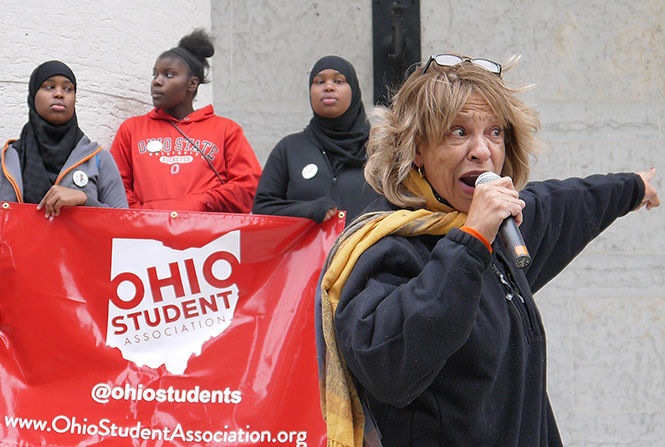 Mama Sue Smith speaks at the John Crawford Rally at the Ohio Statehouse Saturday, Oct. 18, 2014. John Crawford was shot and killed by two police officers at the Beavercreek Walmart in early August and the rally was held to demand justice for John Crawford as well as protest police brutality.

Kent State students gathered at the steps of the Columbus Statehouse on Saturday, chanting, “Black lives matter” and “Power to the people.”

Members of Kent State’s chapter of the Ohio Student Association joined others from the state organization at a rally for John Crawford, who was shot six times by police officers  at a Wal-Mart near Dayton while holding a pellet gun.

“We’re here at the statehouse to demand not only justice for John Crawford, but also a fundamental shift in how police enforce our communities,” said Ryan Kreaps, a  senior psychology major and field organizer for the OSA Kent chapter.

The Ohio Organizing Collaborative, which consisted of the three major OSA chapters in Cleveland, Dayton and Columbus, organized the rally.

Quanita McRoberts, a senior liberal studies major and Africana studies and women’s studies minor at Wright State University, who spoke at the rally, said the rally was also to demand justice to change the laws and training of Ohio police set by the Ohio Attorney General, Mike DeWine.

“All of the laws and training (for the police) are built into systemic, problematic issues, such as racism, sexism and police brutality,” McRoberts said. “And we want to change all those systemic issues from the roots and just reframe all of them and build a new foundation.”

Beavercreek police dispatched officers to the Walmart after witness Ronald Ritchie, 24, called 911 and told an operator Crawford waved a gun around, loaded it and pointed it at shoppers. When officers arrived to the scene, they told him to put down the weapon, then shot Crawford on site after he failed to put the toy gun down.

On Sept. 25, 2014, a special grand jury in Greene County found the officers’ actions justified, and they were not indicted. On the same day, the Wal-Mart surveillance video of the shooting was released after DeWine insisted it could create bias among potential jury pools.

The video showed Crawford pointing the gun pointed down with his back turned as the police approached and shot him in the aisle.

Jack Hassler, a sophomore political economy major in Antioch College, said his campus is 15 minutes away from the Wal-Mart where police shot Crawford.

When he saw the video, Hassler said he was appalled and disgusted at the way the police approached Crawford.

“You see the comments from the video, they say, ‘why didn’t he drop the gun when they asked him?’ There was no communication, there was no attempt, they just walked in and shot him down, it’s very simple to me,” he said.

Many at the rally attested that the events which transpired were due not just to race – as Crawford was a black man and the police officers were both white – but also to how the government often views marginalized citizens.

TaRa’e Porter, a rap artist and songwriter from the Columbus area, participated in the rally with her sons and said she doesn’t believe that the state values the lives of her black sons.

“I think what needs to be done is not just movement building but also institutionalizing our own people, finding, creating and building institutions for our people,” Porter said. “Not just black people, but people of color, mainly. If we have our own institutions, if we have our own system, then we will be able to implement better laws and have better opportunities for our children, but until that is done, I believe that will always be the same.”

After the rally, the OSA Kent chapter members regrouped with the other chapters to reflect on the rally and what ways they could do better.

Maya Ceballos, a freshman English major, said she joined the OSA Kent chapter last week after her friend told her about what happened to Crawford and invited her to join. Ceballos said this was also her first rally.

“It was amazing, I’m probably never going to forget this,” Ceballos said. “I didn’t expect it to be so powerful, and I was on the verge of being overwhelmed, it was just so inspiring and amazing to see all these people come together and stand as one unified group, all supporting each other and trying to make a difference.”

To learn more about the OSA Kent Chapter, visit their facebook page at https://www.facebook.com/studentdebtkent, and their meetings on sunday in room 302 at 7:00 in the student Center.