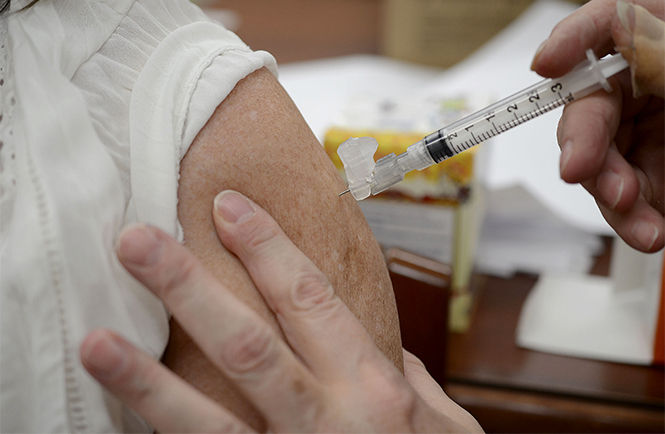 The Kent Stater Flu shot vaccinations were given on the second floor of the Kent State library during the flu clinic event hosted by Kent State nursing students Tuesday, Oct. 28, 2014.

An honors public health course assisted with the flu clinic Tuesday, Oct. 28 to raise awareness of the flu virus and vaccinate as many community members as possible.

University Health Services and Chris Woolverton’s Honors Prevention and Control of Disease course held the clinic on the second floor of the library between 9 a.m. and 3 p.m.

“In past years we only had 300, so I see it as a great improvement,” said Emily Seibert, a freshman public health major who helped organize the event. “It was really cool to see Kent State students fight the flu. Everyone who’s here cares about their health.”

Though the flu clinic is annual, this is the first year students have helped organize the event.

Woolverton said his honors class wanted to raise numbers for those vaccinated on campus. The students increased marketing and advertising to help boost attendance.

“They’re the nuts, the bolts, the brains of everything that’s going on –other than giving the shots,” Woolverton said.

Rebecca Barnes, a junior public health major who helped with the event, said students are more likely to catch the virus between the beginnings of October to the end of January.

Many students think the flu is just like the common cold, “but it’s way more serious than that,” Seibert said.

According to the Centers for Disease Control and Prevention, the United States has had as many as 49,000 deaths in one year due to the flu virus, and the best way to prevent getting the virus is by vaccination.

“One of our advertisements said that 1 in 4 college students will get the flu,” said Barnes. “That makes it even more of a burden for us just how our lifestyle is, living so close together.”

Basic health precautions can help prevent the spread of the flu virus.

Make sure to wash your hands before and after using the bathroom or eating and sharing food or drinks is another way to quickly spread the flu among students, Seibert said.

“I think we share a lot of food and drinks,” Barnes said. “We don’t really pay attention to it.”

Eating healthy, staying hydrated and getting enough sleep are also ways to boost the immune system and protect against the flu.

If any students missed the flu clinic but would still like to get a flu shot, vaccines are available at local companies such as Walgreens or CVS Pharmacy, but require a fee.