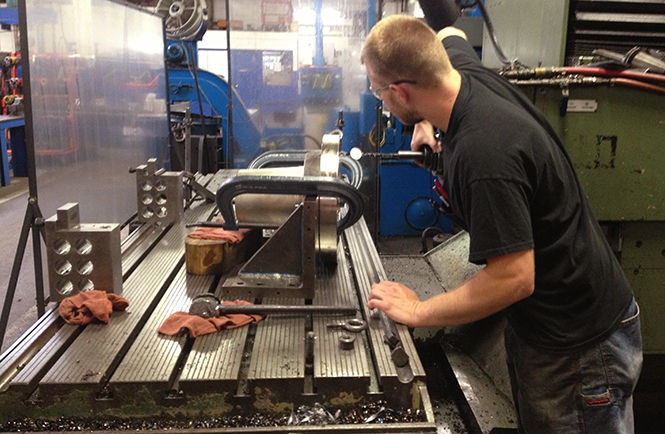 Coty Hartwell, a third-year apprentice at Colonial Machine Company in Kent, checks a gauge at the machine shop. Hartwell is working in Portage County's manufacturing sector and has replaced an aging population in the sector.

Although Coty Hartwell wanted to be a machinist like his father since he was a little boy, the 25 year old knew his aspiration was unusual for someone of his generation.

“I don’t think too many kids my age like to get dirty and do this kind of work,” Hartwell said. “I think they are geared more toward, ‘Let me sit on the phone and make phone calls,’ things that would drive me crazy. I have to be doing something with my hands.”

“A lot of our employees are reaching 60, 65 years old and they’re thinking about retirement,” he said. “We’re trying to find people to fill their shoes and try to catch up to all the years of experience we’re losing.”

Colonial Machine, a company with almost 40 employees, makes molds for the rubber industry. Metcalf said the company’s biggest challenge has been finding skilled workers to take over for its aging workforce.

His company isn’t the only one. So many local manufacturers had this problem, he said, that they joined together to create the Portage County Manufacturers Coalition. Metcalf is treasurer of the group.

The coalition’s goal is to help manufacturers train future employees in much-needed skills such as machining and welding, and to get young people interested in jobs in manufacturing, said Brad Ehrhart, president of the Portage Development Board.

In 2012, it became apparent to the board that manufacturers needed a new way to attract qualified workers, Ehrhart said. After looking at other communities’ solutions, they settled on the coalition model.

“The coalition is a grassroots effort of people who have a problem and are trying to solve it,” Ehrhart said. “Their goal is to get into the pipeline, even to the grade school level, to tell kids and their parents and their guidance counselors and their teachers manufacturing has never died. It’s just changed.”

Mark Trushel, president and CEO of Mantaline Corporation and chairman of the manufacturers coalition, said manufacturing has not properly marketed itself to youth.

“The military recruiters have all done better jobs than we have at being visible and touting what they have to offer,” he said. “It’s our shot to start and try to do that.”

College, and the debt that often comes with it, is not for everyone, Trushel said. He wants to tell students it’s possible to have a good career without taking out loans.

“I sit probably a quarter mile from Crestwood High School,” he said. “My guess would be somewhere between 45 and 60 percent of their graduates are going to go on to college and that’s great, but that leaves 40 percent of the graduating class that (is) doing something else.”

Last year, Mantaline had two men from the high school apply, and Trushel hopes to attract even more students like them through this program.

The coalition took its first step toward recruitment on Oct. 3, National Manufacturing Day, he said. Coalition representatives went to four high schools to talk to students during lunch about opportunities in manufacturing. The group has three more trips planned throughout the month of October.

Many companies have training programs designed to give incoming workers the skills they need for the industry. Trushel said some also offer tuition reimbursement for college degrees to fill other skill gaps, such as engineering.

At Colonial Machine, Metcalf said he believes the key is convincing high school students that manufacturing can give them a good future.

“(Some kids) might get left behind if they don’t realize they can go right down the street and get a pretty good job that can help them succeed in life,” Metcalf said.

Hartwell believes Colonial Machine will give him the stability he is hoping for in his future.

“It’s a career, not just a job,” Hartwell said. “It’s somewhere you can hang your hat and know tomorrow, a year from now, 20 years from now, it will be here, God willing.”