Do or die: KSU soccer in the middle of tight playoff race 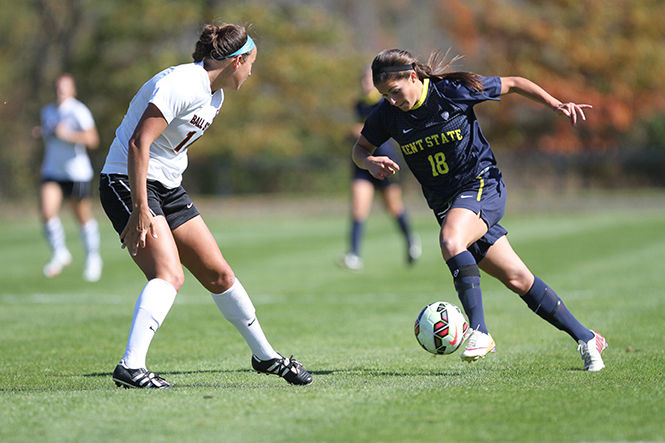 With three games left in a season full of ups and downs, wins are the keys that will open the playoff door.

The Kent State soccer team (8-5-3, 3-3-2 MAC) currently sits in fifth out of 12 teams in the Mid-American Conference. Only the top eight teams move on to the postseason, which is determined by conference points. A win is worth three points, a tie one and a loss zero.

Each MAC team has three games left on its schedule, which means the chance to gain nine more points before the field of 12 gets cut to eight for the MAC Tournament.

Even with only three games left in the season, every MAC team is mathematically eligible to make the playoffs.

The Flashes cannot win the MAC East because if they win their last three games, MAC East leader Buffalo will still win the tiebreaker (conference wins), even if it loses its last three games.

Since a division title is not in the cards, the goal for Kent State is simple: Make the playoffs.

There are currently three teams — Bowling Green, Ohio and Toledo — tied for the last playoff spot with nine points apiece. Akron and Central Michigan are holding on for dear life in the MAC standings basement with six points apiece.

The Flashes, currently with 11 points, can clinch a playoff spot with three wins, regardless of what any other team does.

However, the Flashes’ playoff chances shouldn’t seem that dramatic because a lot of this scenario relies on what other teams do. If Kent State can sweep its two upcoming weekend games against Toledo (6-9-1 MAC) and Central Michigan (4-11-1 MAC), Bowling Green and Ohio lose one game and Akron has at least one loss or two ties, Kent State will secure a coveted playoff spot.

“It’s a long season — we just want to be there for the whole season,” junior goalkeeper Stephanie Senn said.

Senn, who is third in the MAC in save percentage, acknowledges that the last stretch of games is very important and that Kent State needs to turn things around immediately.

“Even if the last couple games haven’t gone the way we wanted them to, we can change that for the (last three games) of the season,” she said.

The Flashes started off the season strong, dominating their non-conference schedule with a 5-2-1 record, even knocking off No. 24 Colorado. However, in recent games, the Kent State offense has sputtered after being unable to come alive when given the chances throughout games.

“It’s the little things that we just have to keep working on,” sophomore forward Jenna Hellstrom said.

Hellstrom, who leads the Flashes in goals and points with five and 15, respectively, said communication especially will be the biggest thing to work on to get the team back on track.

“Communication is a big factor right now,” she said. “We’ve been working on it all week during practice. Even when (a game) isn’t going our way, we just need to keep communicating and that should change a lot of it.

Kent State coach Rob Marinaro said there is strong parity in the MAC, as a lot of teams are evenly matched, which makes it a close playoff race — a dog fight for a MAC title.

The team needs to find the way back to playing with the confidence, speed and energy it possessed earlier this season, Marinaro said.

“Our speed of play is pretty quick, and we need to get back to playing a whole lot quicker and attacking teams and creating our own space,” he said. “There’s still a lot of work to be done. We need to pick up points.”

Kent State will host the Toledo Rockets on Friday at 4 p.m. and the Central Michigan Chippewas on Sunday at 1 p.m. Both games will take place at Zoeller Field.