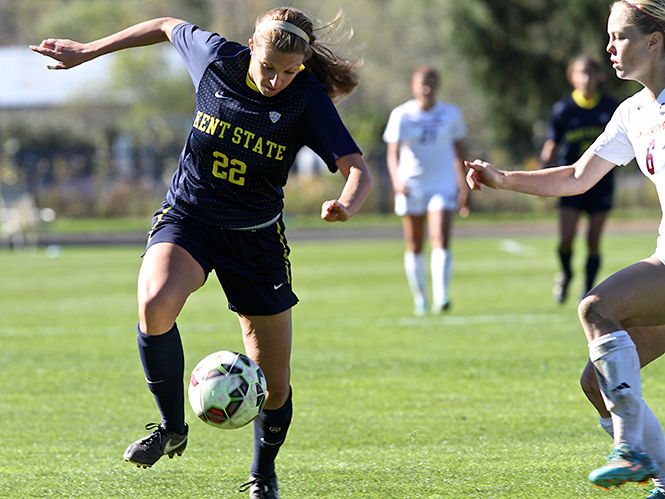 Sophomore midfielder Abbie Lawson gets the ball from a Central Michigan player at the game Sunday, Oct. 26, 2014. The Flashes lost, 0-1.

The Kent State soccer team ended its regular season in dramatic fashion with a 3-2 overtime win over Ohio University on Thursday in Athens, Ohio.

In the 10th minute of overtime in a heated matchup against the Bobcats, Kent State junior Madison Helterbran knocked in her third goal of the season to break a 2-2 tie and give the Flashes their 10th win of the season, thus securing the fifth seed in the Mid-American Conference Tournament.

Kent State sophomore Abbie Lawson got things started in the 13th minute of regulation, scoring off a pass from Doni Capehart. Ohio quickly answered in the 21st minute with a header off a corner kick. Just before halftime, the Bobcats took the lead with a goal off a penalty kick.

Kent State would not give up, however. In the 57th minute, offensive star sophomore Jenna Hellstrom curved a beautiful shot over the goalie’s head on the left side of the net to pull things even at two apiece and give herself a team-leading seventh goal of the season.

Neither team could break the tie in regulation, so Kent State would embark on its second overtime game of the season. On Oct. 17, the Flashes defeated Eastern Michigan, 2-1, in overtime after a 96th minute score by freshman Jaime Eiben.

On Thursday, it was Helterbran who played the role of hero for her team, as her goal in the 100th minute secured a 3-2 win for the Flashes.

With the win, the Flashes finish the regular season with a respectable 10-6-3 overall record and modest 5-4-2 record in the conference, which is good for the fifth overall seed in the upcoming eight-team MAC playoffs.

The Buffalo Bulls won the MAC regular season title, going 9-0-2 in the conference and 13-2-3 overall. As a team, Buffalo is ranked 47th in the country and is certainly the team to beat in this playoff picture.

As for Kent State, it will need to do what it did during its match with Ohio to have any chance at a MAC Championship: make the most of opportunities. The Flashes have had a MAC-leading 296 shots, but average less than 1.5 goals per game. Time and time again, coaches and players have said the biggest factors in this season’s losses were missed opportunities.

To win the MAC Tournament, the Flashes need to make the most of every scoring opportunity.

After a season of ups and downs, winning streaks and losing streaks and even beating a nationally ranked team, it all comes down to the MAC Tournament.