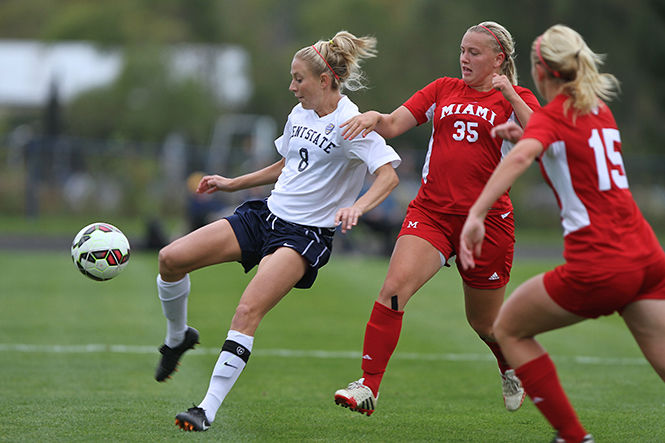 Alyssa Meier, Kent State redshirt senior defender, attempts to keep possession of the ball at the game against Miami University on Friday, Oct. 10, 2014. The game ended in a tie 1-1.

A soccer team can dominate almost every statistical category, but if it can’t score, the rest doesn’t matter.

On Sunday at Zoeller Field, the Kent State soccer team commanded the numbers game on paper but couldn’t win the actual game, losing to Ball State, 1-0, and falling to 7-4-3 overall.

The Flashes (2-2-2 MAC) dominated in almost every facet of the game and in almost every major statistical ratio. Kent State outshot Ball State, 17-7, had one more corner kick and one less foul, but ultimately couldn’t find the back of Ball State’s net.

“We created our opportunities today, and we just need to be a little bit more dynamic in our finishing and have better quality on our chances,” Kent State coach Rob Marinaro said.

The Flashes gave up the lone goal of the game to the Cardinals in the 34th minute of action. Ball State sophomore Leah Mattingly crossed a corner kick from the left side to senior Victoria Jacobs, who headed the ball into the top right corner of the net.

Kent State had many chances to capture the equalizing goal in the second half but wasn’t able to capitalize.

“We had spurts throughout the game,” sophomore forward Jenna Hellstrom said. “We had our chances. I guess we were just unlucky.”

Eight minutes into the second half, freshman Kristen Brots emerged from the midfield, but her shot from 12 yards out hit the crossbar. With 10 minutes remaining, senior Stephanie Haugh fought for a ball inside the 18-yard box, but the Cardinals’ goalkeeper thwarted her attempt.

The Flashes’ last meaningful chance to tie the game came with 6:17 left when Hellstrom gained control of a cleared Kent State corner kick to the left of the 18-yard box and let loose at 22-yard shot that failed find the net.

“We’re still playing well and creating our opportunities,” he said. “We need to keep the energy high and the focus and desire to compete.”

The Flashes had been riding a four-game unbeaten streak, with their last loss coming to MAC East division leader Buffalo on Sept. 26.

Kent State started the season strong with a 5-1 record, but since then has posted a record of 2-3-3.

This week, the Flashes will meet the best and the worst on the road Friday at 4 p.m. and Sunday at 1 p.m., as they travel to Eastern Michigan and Bowling Green, respectively. The Eagles are 8-4-1 overall and in sole possession of the MAC West lead, while the Falcons are 2-11 and last in the MAC East.