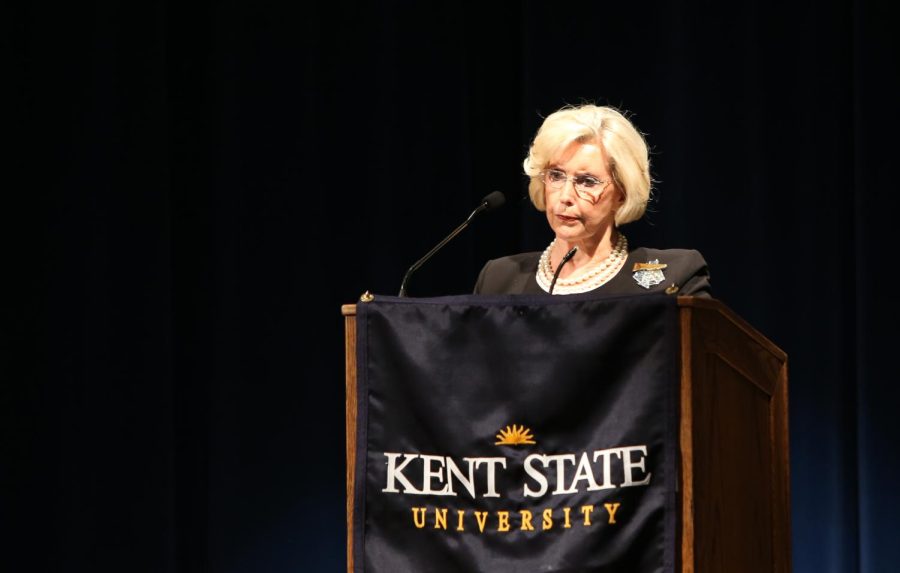 Lilly Ledbetter speaks about the problems she experienced with Goodyear during her career to an audience at the Kiva on October 20, 2014.

“It’s been a great journey, it’s been a hard journey,” the prominent women’s rights activist Lilly Ledbetter said during a lecture Thursday evening in the Kiva.

Ledbetter, a crusader for equal pay and women’s rights and author of “Grace and Grit: My Fight for Equal Pay and Fairness at Goodyear and Beyond,” shared her personal experiences in the workforce during the lecture and book signing

Beginning her speech with a comical spin, Ledbetter went on to focus on equal pay and equal work, and her newest book.

She talked about the ways her experiences shaped her personal views, including a time when she received an anonymous note informing her she was making 40 percent less than her male coworkers.

“I was embarrassed,” Ledbetter said. “How could I go back to work knowing what I knew now?”

The crowd of nearly 100 consisted of a mix of Kent State students, staff and administration.

As Ledbetter spoke, many in the audience quietly shook their heads as Ledbetter talked about those opposing her cause.

One way to solidify equal pay in the workforce is to join the American Association of University Women, Ledbetter said. The AAUW is a national program that promotes equity and education for women and girls.

This is the first year CSI has put on a speaker series. Each of the five lectures in the series pertains to the Center’s five leadership cornerstones: communication, service, teamwork, vision and engagement.

“She is a tireless advocate for change, gender prejudice and sexual harassment,” Marshall said.

During the question and answer session, an audience member vocally praised her for having the courage to go up against a large corporation. She said that people like Ledbetter will change the way things operate.

Several students found what she had to say important and meaningful.

“It’s not often we get leaders that are this important and nationally known,” he said. “I think we need more people with her courage and who aren’t afraid to tell it how it is and stand up for themselves and for others.”

Ava Moss, a freshman public relations major, said she found the speech to be very motivating.

“I got out of this to not give up hope,” Moss said. “Don’t give up on the issue of gender equality and financial equality. There’s always hope if you keep fighting for what’s right.”