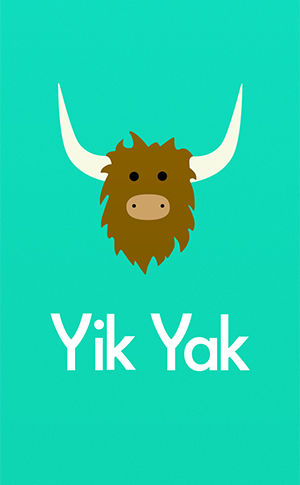 Anonymity is at the forefront of “Yik Yak,” an app that has become both popular and controversial at Kent State, as well as other schools across the nation.

Launched in December of 2013, Yik Yak allows users to post what is on their mind in a 200-character limit, and view posts from others within a 10-mile radius. Junior William Hoag, a computer science major at Kent State, compares the app to Twitter.

“I see it as an anonymous Twitter,” Hoag said. “An anonymous way to post stuff in a geographical location and people are drawn to being able to explain what’s on their minds in a certain amount of characters at a particular moment.”

Junior computer science major Alex Styles said he enjoys the app and thinks it has become popular because it gives people creative freedom that isn’t as threatening as other apps.

“You can really feel like you can say anything you want,” Styles said. “You kind of have a sense of power with being anonymous.”

Hoag said one positive thing about the app is that it gives users a sort of confidence to do things they wouldn’t normally do in person, such as talking to somebody they may have a crush on.

“Guys will post about an attractive girl that walks by and they don’t want to walk up to her and say something, and then you will get people that will comment on it saying you should talk to her,” Hoag said. “People don’t have it in themselves to say something by themselves so the app is kind of like a self-reassurance.”

Being anonymous is something many believe has made the app popular, but for that same reason, students and faculty have said it can also cast the app in a negative light.

Many schools across the nation have reported threats of violence such as bombings or gunman in the schools through the app.

Suffolk Community College in Long Island recently had to be evacuated when a user of Yik Yak posted a threat of a gunman inside of the college, according to Long Island’s News 12.

There have also been cases of cyberbullying in schools that have been linked to Yik Yak.

Nicole Carlone, social media community manager at Kent State said many high schools across the country are starting to ban or block the use of the app on school property.

“If a student were to try to log in to Yik Yak at a certain high school, they will get a notification that detects that they are near or on a high school campus and they will be blocked,” she said.

Carlone also said that students could overuse the fact that users are anonymous to write negative things that they aren’t able to say with their username attached.

“I think students see that anonymous postings allow them no responsibility or accountability,” Carlone said. “Everything they want to say on Twitter that they can’t, they can say it on Yik Yak.”

When asked if social media sites, such as Yik Yak, allow for too much user freedom, Carlone said that while Yik Yak’s anonymity aspect gives students more freedom, if students want to say something negative, bully people or scare people with threats, they will find a way to do so.

“I think the Web is the Web,” Carlone said. “No matter what social media platform it is, anyone can say anything at any given time.”

Hoag also stated that users have to be aware of the impact they can have on others using the app.

“You have more freedom when posting anonymously,” Hoag said. “But you have to know how to use that freedom wisely.”