Two away games for KSU soccer this weekend 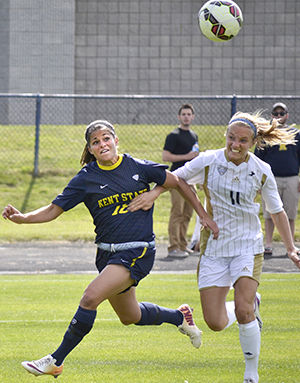 Kent State University senior forward Calli Rinicella struggles against Akron's Abby Gindlesberger to gain possession of the ball in the game Sunday, Sept. 28, 2014. The Flashes went on to win 3-0 and kept the Zips from taking a single shot on goal for their first MAC win of the season.

After a successful four-game home stand, the Kent State soccer team is on the road this weekend for two conference matchups.

Kent State (6-3-1) finished 2-1-1 in a home stand that started Sept. 19. The Flashes tied Oakland, defeated Eastern Kentucky, lost to Buffalo and then defeated longtime rival Akron to earn the year’s first Wagon Wheel point in the Akron/Kent State rivalry. Buffalo and Akron, two MAC East teams, were the first two of 11 conference games for Kent State. Up next for the Flashes are two opponents from the MAC West.

First up, on Friday, Oct. 3, the Flashes will travel to DeKalb, Illinois to face the Northern Illinois Huskies, who are 4-6 but have won four out of their last six games. NIU is coming off the heels of two consecutive overtime wins against MAC opponents Central Michigan and Toledo. Freshman goalkeeper Amy Annala had a combined 19 saves in those victories, earning her MAC Defensive Player of the Week honors.

The Huskies are 2-0 in the MAC for the first time since 1998 and have defeated Kent State for the past two years. Freshman Lauren Gierman leads the Huskies in goals and shot attempts with three and 16, respectively.

Even with their recent momentum, the Huskies’ offense is still lacking. Northern Illinois has been outscored 20-14 by its opponents, and out-shot 139-91.

Kent State will be in Kalamazoo, Michigan on Sunday, Oct. 5, to take on Western Michigan University. The Broncos will possibly be Kent’s most difficult opponents so far. Western Michigan is currently 8-2 overall, 2-0 in the MAC, and riding a three-game winning streak.

Kent State and Western Michigan have a little bit of a recent history with each other. Last season, the Broncos ­— who eventually won the MAC Women’s Soccer Tournament — beat the Flashes, 3-2, in penalty kicks in the tournament quarterfinals.

For the second year in a row, the Broncos have formidable offensive firepower. Western Michigan’s top three goal scorers from 2013 are on this year’s roster. The offense is a mix of old and new, as freshman Emma Kahn currently leads the Broncos with three goals and seven points. Kent State will play Northern Illinois on Friday at 7 p.m. CST and Western Michigan on Sunday at 1 p.m.