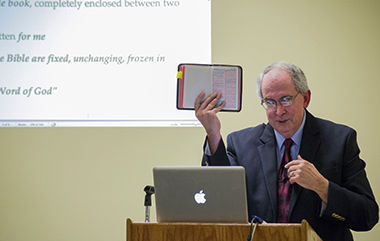 Robert Fowler, Ph.D., a Professor of Religion at Baldwin Wallace University, speaks in the Student Center on Monday, September 6, 2014 about media influence on reader's understanding of the bible throughout history. Fowler said, "Electronic media allows old media, like the bible, to exist in many new ways never thought possible."

The vast history of the Bible is more complicated than most people realize. At the annual fall symposium for the Center for the Study of Information and Religion, Bible professor Robert Fowler presented “The Gutenberg Parenthesis of the Bible, or Why Everything You Know About the Bible Is Wrong” to an audience in the Student Center.

Close to 30 people attended the symposium Monday night where Fowler, a professor of religion at Baldwin Wallace University, gave the keynote address.

“The Bible has been in print for over 500 years, but that’s just a fraction of the history,” Fowler said.

The focus of his talk centered on the media history of the Bible, from ancient oral culture to handwritten manuscripts, to print Bibles produced by Gutenberg’s printing press and ending with the current explosion of electronic media.

“Because we have been reading the Bible for 500 plus years, we naturally assume that is the way people have always experienced the Bible, but that is not the case,” Fowler said. “For 2,500 years prior to Gutenberg, most people experienced the Bible either through oral or aural performance or in the form of unique and rare hand-written manuscripts.”

Even when biblical books began to be written on parchment or papyrus, few people could afford them or read them, Fowler said. Most people could only experience biblical material at live spoken performances.

“It was only when the printing press was invented that people began to imagine owning their own Bible and read it for themselves,” he said.

Prior to the Gutenberg printing press, most of the Bible was dictated through spoken words only, passed on through word-of-mouth, which, Fowler said, is “why everything you know about the Bible is wrong.”

“I kind of expected it to be more of a ‘here are some specifics about what the Bible says and here’s why I disagree with them,’ which I suppose makes sense that it wasn’t like that,” said Amanda Pigford, a Masters of Library Science graduate student. “He came at it from more of an academic point of view, walking us through the historical periods of how people communicate.”

Don Wicks, the director of the CSIR, said the symposium occurs each fall with an annual conference in the spring.

When planning the fall symposium, Wicks said he tries to present something of interest for a broad community, whereas the spring conference is a more traditional, academic conference.

For more information on the CSIR, please visit https://www2.kent.edu/slis/research/csir/index.cfm