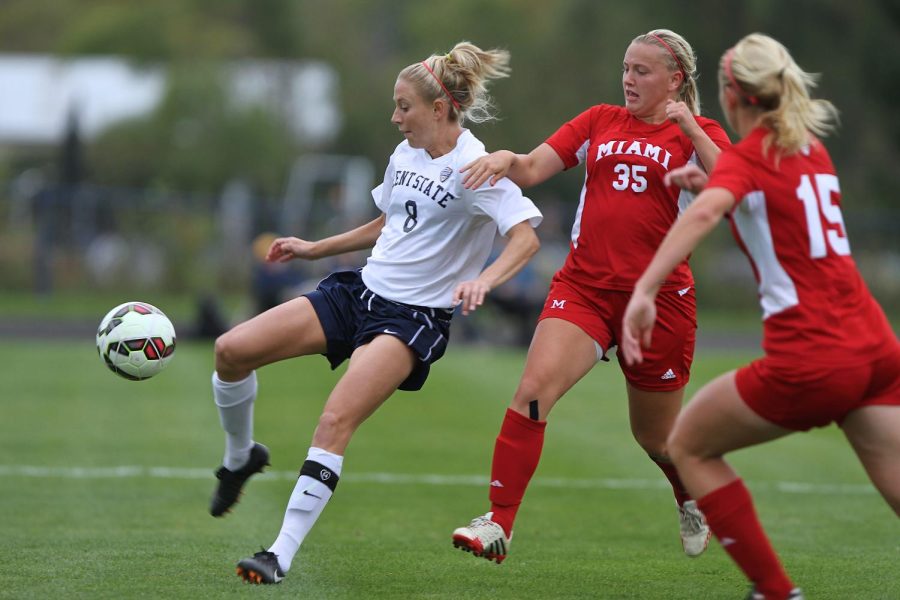 Alyssa Meier, Kent State redshirt senior defender, fights for possession of the ball at the game against Miami University Friday, Oct. 10, 2014. The game ended in a tie, 1-1.

The Kent State soccer team hosted Miami University on Friday at Zoeller Field in a conference rivalry resulting in a 1-1 tie.

Coincidentally, the final score of Friday’s game wasn’t the only factor split down the middle. Both teams had 17 fouls over the course of the 110-minute double overtime game and both teams scored the game’s only two goals in the first half of the match.

Miami struck first with 15:38 to play in the first half. A goal by Kelsey Dinges assisted by Shannon Stearns gave the conference rivals a 1-0 edge, but only for 13 seconds.

Kent State’s possession immediately following Miami’s goal tied the game knotting the two teams up tighter than the conference tension on the field.

Sophomore forward Jenna Hellstrom booted in the shot, which was assisted by senior Stephanie Haugh.

“Right after they scored, instead of putting our heads down, we put them back up and went hard at them, and we scored,” Hellstrom said. “It was a tie — both teams were competing hard to get the win, both teams were both equally as intense, so it was a really hard fought battle between both teams.”

The Flashes (7-3-3) will host Ball State Sunday afternoon at 1 p.m., competing in their sixth consecutive Mid American Conference game. Hellstrom noted that Friday’s game was good for preparing the team for Sunday.

“We came out really hard for 110 minutes,” Hellstrom said. “We just tied the team that won east last year. So I think it’s a huge improvement from the last few weeks. I think from here we just need to keep our heads up and look for the W on Sunday.”