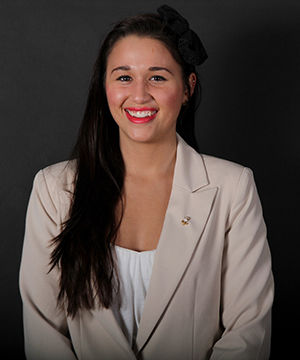 Junior applied communications major Megan Carrasco was elected as the senator-at-large for USG on Wednesday, Oct. 29, 2014.

Carrasco is a junior applied communications major with minors in Spanish and public relations. She currently serves as the president of the Body Acceptance Movement and the vice president of Membership Education for the Panhellenic Council. She is also a member of the Delta Gamma Sorority.

Before being approved, she was asked why she wanted to be a part of USG.

“I am really interested in serving a larger population. I’ve really been involved in a lot of Greek life stuff -the Body Acceptance Movement has been my stepping out of that,” Carrasco said. “I’ve really enjoyed what I’ve done so far here at Kent State and I think I’ve gained the skills and the knowledge to be able to better serve the entire student body.”

USG unanimously voted to approve Carrasco after her remarks. She joins fellow Senators-at-Large Joshua Lewis and Blake V. Springhetti in her new position.

Arrests during Halloween weekend were similar in number to last year. Most of the arrests were non-Kent State students. Visitors from other cities and juveniles made up a large portion of the arrests. Police began preparations for this year’s festivities weeks in advance. Tickets for Laverne Cox’s presentation sold out and there are more than 800 people on the waiting list. The KIVA may be used to livestream the event to students who are on the waiting list. Tickets to the livestream event will only be given to Kent State students. USG allocations will cap funds for individual students to $2,000. Students who participate in events that cost more than $2,000 will be responsible for finding other ways to cover their expenses. The College of Public Health will hold its first career fair next semester. The fair will bring professionals in public health to Kent’s campus. Professionals will speak to students about the field and its career opportunities. The College of Communication and Information is continuing the search for its new dean. USG Senator Matthew Gilkerson is on the selection committee.