Art of Contrast fashion show leaves the borders behind 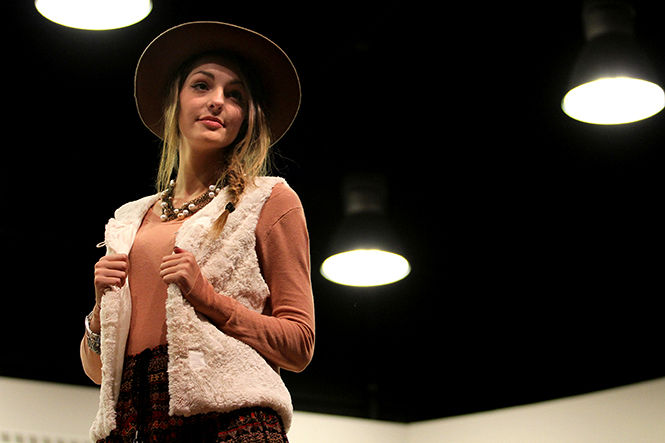 A model looks out to the audience while walking across the stage during the Art of Contrast Fashion Show in the Schwartz Center Friday, Oct. 10, 2014.

The Art of Contrast, FSO’s annual fall fashion show, included submissions from designers as well as stylists with a varied mix of solo garments and collections.

“Without Borders” was the theme of the show.

“Students were allowed to pick one of the study away programs that the fashion school offers—New York, Hong Kong, Florence and Paris—as their inspiration,” said Jessica Ballas, senior fashion merchandising major and FSO President.

The show featured 27 designers, 45 stylists and 61 models—the largest number of participants to date. The garments and models were judged by Catherine Amoroso Leslie, associate professor and graduate studies coordinator of the School of Fashion Design and Merchandising; Alison Rossi, a graduate student in the Master of Fashion program; and Brittany Mizelle, former president of FSO and former senior co-producer of The Fashion School’s Annual Fashion Show.

Awards were given to the top designer, stylist, collection and model.

“The three main things we were looking for were creativity, originality, relationship to the city and inspiration from the city,” Leslie said.

“My inspiration was the cathedral in Florence, Italy, and I made a lot of chains, and I used gold shimmer to be cohesive with the cathedral and Florence,” Seymour said.