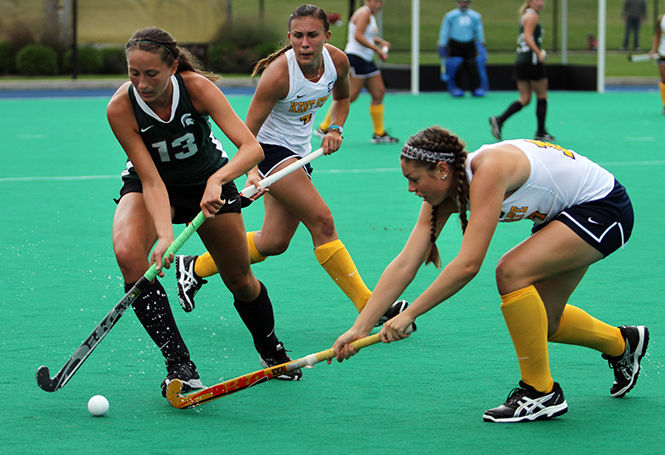 The Kent State field hockey team hosted No. 19 Michigan State on Saturday, Sept. 13, at Murphy-Mellis Field and lost their second overtime game, 3-4, in as many days.

Momentum began rolling just 24 hours after a tough, 3-4 overtime loss to University of Richmond Spiders on Friday afternoon. Flashes’ senior Hannah Faulkner sparked Kent State’s offense and scored her first goal of the game, assisted by freshman Ines Delpech deflecting off a shot off a corner.

Nearly four and a half minutes later, Alexis Madeira scored the second goal of the game assisted by Faulkner and junior Alayna Harris, giving Flashes an early 2-0 lead.

Although Michigan State cut the lead in half several minutes later off an unassisted goal by Megan Fenton, the Flashes (2-4) still finished the first half with a one-goal edge.

After a tight 20 minutes of second-half action, Faulkner scored her second goal, this one unassisted, that she snuck in the top of the left corner with just over 14 minutes left to play in the half.

The team’s comfortable two-goal lead was extinguished barely over a minute later when Michigan State’s Kendal Anderson scored an unassisted goal for her squad. Abby Barker of Michigan State took advantage of another scoring opportunity late in the second half to tie the game and send the Flashes back into a recent, all-too-familiar situation: overtime.

It was anyone’s game until Barker assisted Becky Stiles in the goal that dealt Michigan State its third win of the season, but Kent State head coach Kathleen Wiler kept her team’s morale up after another tough loss.

“We’re playing great — we really are,” she said. “To be up 3-1 for the past two days has been awesome. We just need to keep working towards getting that win.”

Faulkner added that she was impressed with how Flashes played in the first half.

“(In the first half), we were really connecting and flowing,” she said. “The second half, they came out a little tougher because they were down and we had a little more competition going into the second half,” Faulkner said. “We just knew we had to keep it up and hold them at the net.”

Kent State’s next match will take place at home against the University of Michigan on Sunday, Sept. 21, at noon.