Flashes look to turn things around in Philly 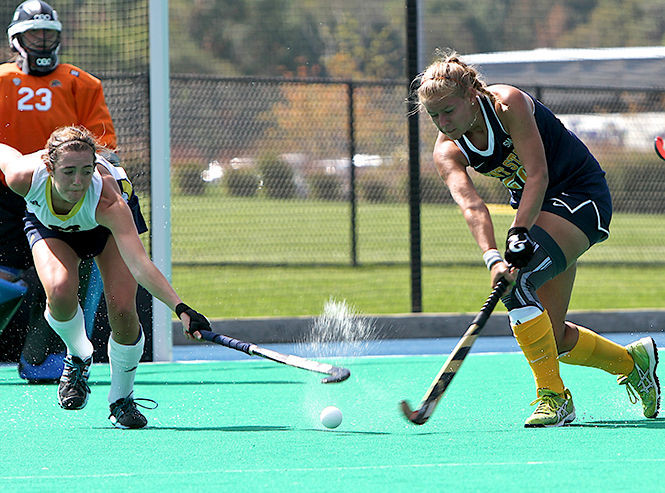 Kent State Junior Susanne Felder attempts to steal the ball at the field hockey game against the Univeristy of Michigan Sunday, Sept. 21, 2014. The Flashes lost the game 3-2.

Although Kent State’s field hockey team has been on the wrong end of the scoreboard more than it would like to be, it hasn’t discouraged the team from working hard and continuing to improve in order to earn future victories.

The Flashes will head to Philadelphia this weekend to take on Temple University and Drexel University. Kent State field hockey coach Kathleen Wiler said she knows what needs to be done in order to come home with two victories.

“We just need to play two complete halves and not concede when momentum shifts against us,” Wiler said.

Wiler said she was proud of the way the team responded its last game against the University of Michigan and hopes that attitude carries over in the upcoming games.

Senior Julia Hofmann will help lead the Flashes as they look for a quick turnaround.

“We just need to believe in one another and finish out the game when we have the chance,” Hofmann said.

She said she believes it ‘s important for the team to learn from each game and build on it as they go forward.

“We need to think about the positive side of previous games and know that we are up there with some high-ranked teams, and we can win,” Hofmann said.

Remaining positive is crucial for the Flashes to be competitive the rest of the season.

A major reason for that is sophomore goalie Andrea Rinehart. Rinehart is coming off of a career high 15-save game against Michigan. She will try and hold this weekend’s opponents to minimal goals as the offense continues to attack.

The Flashes will need to come together and play well as they know their opponents will be ready.

“We’re excited to be playing this weekend and get on the road where we have been successful this year,” Wiler said.