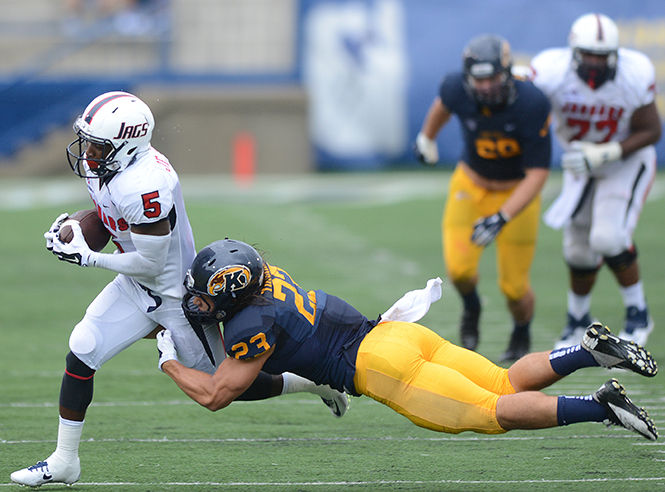 The Kent State football team has not started off the 2014-15 season the way it hoped to coming into this season.

Three games in, the Flashes are still searching for their first victory of the season. Two weeks ago, the Flashes were outmatched against an athletic Ohio State team that was too fast and fundamentally sound for them to handle.

The 312-yard passing game by Barrett was the first game of 300-plus yards passing for a Buckeye quarterback since Troy Smith threw for 316 against Michigan back in 2006.

“On the defensive side we were actually playing decent until the last game,” Kent State head coach Paul Haynes said. “We had too many missed tackles and missed assignments down in Columbus.”

Kent State sophomore safety Nate Holley recorded his second game of the season with 12 solo tackles. Holley earned the MAC East Defensive Player of the Week award after the season opener with a similar performance.

“My job is to stop the run, but I am also supposed to be good in the pass game as well,” Holley said. “My passing game needs a little more adjusting. I’ve been working on that really hard because I want to be a duel-threat safety. I don’t want to just be a safety that can only stop the run.”

Holley’s performance aside, the Flashes struggled on both sides of the ball against Ohio State. Staying in the game with a nationally ranked team that produced 628 total yards of offense proved cumbersome, especially when Kent State’s offense committed three turnovers and finished the game with only 126 yards of total offense.

A solitary bright spot on offense for the Flashes last week was the effort of sophomore running back Nick Holley. Nick only carried the ball six times on, but completed the day averaging 5.7 yards per carry.

Just like his brother Nate on the defensive side of the ball, Nick Holley is a maximum effort player and gives his all when his number is called.

“I believe you have to be very decisive, and obviously you have to be powerful as a D-I back,” Nick said. “Hitting the hole hard and being low — just working on the little things like pad level and ball security is what it takes.”

The Flashes will hit the road and travel to Virginia, hoping to play their best game yet and knock off the Cavaliers, this Saturday. The game will start at 3:30 p.m.

“Mainly it’s just going back to fundamentals,” Nate said. “We need to do the little things right, getting off blocks using our hands and tackling. We have had a total of 44 missed tackles in three games, and you just can’t do that and expect to win ball games.”