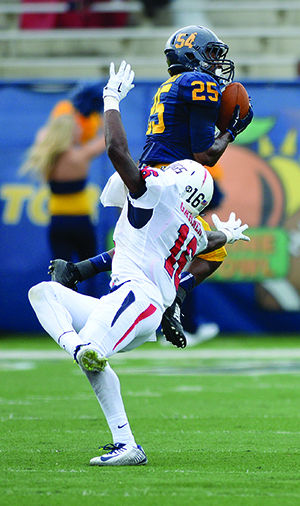 The Kent State football team will have to do better than last week if they want to be victorious this week.

The Flashes didn’t do well last Saturday as they turned the ball over five times and fell to the University of Virginia Cavaliers, 45-13.

“I’m very disappointed,” Kent State coach Paul Haynes said. “We didn’t play two halves — it was a tale of two halves, and we didn’t play well in the second half. We talked about the ball is the program, and there is no way against a quality opponent like Virginia that you can turn it over five times and win.”

Junior Anthony Melchiori made his first and second field goals of the season, including a 43-yarder.

The Flashes have forced at least three or more turnovers in three of four games this season. Kent State had its highest time of possession for a half this season, holding the ball nearly 20 minutes in the first two quarters against Virginia.

The Flashes did a better job producing offense Saturday in the first half, but they have to take care of the football if they want to compete with the Northern Illinois University Huskies this Saturday.

The Flashes have turned the ball over eight times in their last two contests — something a MAC team simply can’t do when competing against teams in the ACC and Big 10.

“We’re a young football team, but that is no excuse,” Haynes said. “We have to make sure we do the little things right, and if we don’t, then those things are going to happen.”

Kent State’s second drive of the game, which produced a 45-yard touchdown by sophomore wide reciever James Brooks, is something to build on heading into the game this week against the Huskies. The Flashes marched 78 yards in six plays to score the touchdown, which put them up, 7-0, with 8:52 remaining in the first quarter.

Kent State sophomore quarterback Colin Reardon was 12/28 for 219 yards, one touchdown and three interceptions. Brooks caught his first career touchdown, the 45-yarder, from Reardon. The play was Kent State’s longest offensive play of the season.

One of Reardon’s interceptions was returned for a momentum-shifting Virginia touchdown in the first quarter. The Cavaliers also recovered a Reardon fumble in the second half.

“We still have to come out and play well,” Haynes said. “We didn’t play very well in that first series of the second half. Like I said, we just have to play better. You can’t beat two teams, and we’re beating ourselves right now.”

Sophomore safety Nate Holley was Kent State’s leading tackler for the sixth straight game with 15 tackles and remains among the nation’s top tacklers.

“(It was) nothing that they were doing. It was more so of us missing our fundamentals and techniques,” Holley said. “We had some assignment errors. It wasn’t anything differently that they did, we just beat ourselves in that third quarter.”

Kent State finished the game with a season high 318 total yards of offense, 72 of which came from the rushing attack.

“It was a little bit again of what they were giving us,” Haynes said. “If you can sit there and throw hitches for five yards, and run for the football for three or four then you’ll get first downs. We just have to continue to do it on a regular basis.”

Kent State will travel to DeKalb, Illionois this Saturday to battle the Huskies. The game is set to begin at 5 p.m.