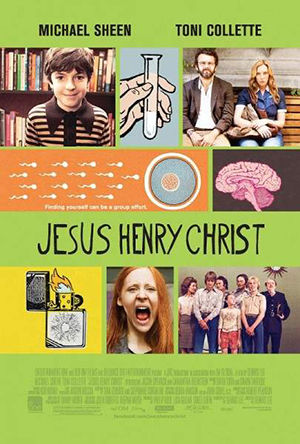 Jesus Henry Christ. Whether the title is considered religious blasphemy or something out of midwestern drama, this comedy is perfect for Wes Anderson-style movie fans.

At the age of 10, Henry begins to question who is father is. He’s a petri-dish, prodigy kid, born to a single, hard-core feminist mother Patricia (played by Toni Collette) who opted out of having a husband. If that’s not awkward enough, take a whirlwind step into the office of loony college professor Slavkin O’Hara (played by Michael Sheen) to find the walls covered in sticky notes and his gender-neutral, red-headed child Audrey.

When Henry and Audrey venture into the cold world of the sperm donor facility to find out who Henry’s father is, the plot of this Frankenfamily drama get’s real twisted. It’s pretty much a given that someone ends up being related to someone else, and everyone becomes part of the family.

Unlike the director’s previous film, Fireflies in the Garden, which was packed with A-list celebrities (i.e. Ryan Reynolds and Julia Roberts), this film uses low-key actors to tell a story of discovery in the modern world of mixed families and blurred relationship lines.