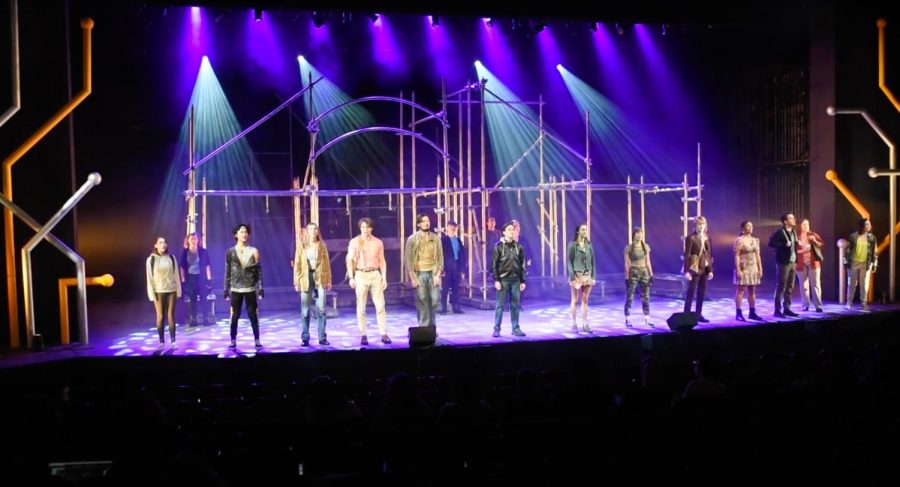 The new musical Chaining Zero is playing at E. Turner Stump Theatre in the School of Theatre and Dance. The play was written by Kent State alumni Griffin Parsons and John Moauro.

Two Kent State alumni, Griffin Parsons and John Moauro, have brought their new musical Chaining Zero to the School of Theatre and Dance for its first live performance.

The story, which centers around a diverse group of people who are stranded in a New York City subway car that detaches from the train, is a developmental production. A developmental show allows writers to edit and rewrite scenes while actors rehearse.

“We’ve added a reprise of the song because we thought it would fit in a perfect place within the show so it’s been a partnership to connect, have the students create a new work and have us really hash out our show in a live setting and see it fully staged for the first time,” said Griffin Parsons, writer and a 2006 alumni of Kent State’s School of Theatre and Dance.

For production stage manager, Alexandra Baxter, who is a junior technology student with a concentration in stage management, sending the actors a reworked script has been a new experience.

“We would have a new script with different pages and different line notes and pieces of scenes that needed to be worked out through different days,” Baxter said.

Senior Erin Ripley is a musical theatre major and a theatre management major and plays the role of a woman who struggles with addiction. She said this is the first time she has been part of a new musical.

“It’s really interesting getting rewrites everyday and like learning new lines and working with the writers,” she added.

While this is the first stage performance of Chaining Zero, the musical has been introduced to theatre before.

A 29-hour reading of the play took place in the fall of 2019 at the Mary Rodgers Room in New York City with actors who are members of the Actors’ Equity Association. The professionals stood with microphones and read the script out loud.

“It was really great to allow us to hear our material out loud for the first time,” said John Moauro, writer and a 2007 School of Theatre and Dance alumni. “That was the first opportunity that we had to do that.”

The script has also been submitted to writing contests, including the 2021 National Musical Theatre Competition where Parsons and Moauro were semi-finalists.

The alumni are not the only creatives who helped produce the story. A collaboration between writers and musicians began five years ago. Alana Rader, who is a 2005 School of Theatre and Dance alum, was part of the writing process in the early stages. Nashville songwriters, Jeffrey James and Justin Halpin, wrote the music and lyrics for the play.

The team continued to collaborate remotely through the pandemic, which is when they sent the script to Kent State.

“There’s no greater joy than to support their work after they’ve graduated as established professional careers,” Kent said.

She added that it’s really important for the board to choose new works, and this play gives students the opportunity to develop a character from the ground up.

Chaining Zero’s performers, designers, stage managers and stage crew are all students, equating to a production team of 50-75.

Dylan Ratell, a theatre major in the master’s program, plays the character of a homeless war veteran with post traumatic stress syndrome. He said this role has been an opportunity for him to explore something new.

“The task we have is to not only put on a good show but to fill in all the blanks [and] create characters who haven’t been made before,” Ratell said.

Another theatre major, senior Megan Polk, plays the role of a beauty influencer. Polk said it’s important for her to learn a new show without a cast recording to listen to.

“It’s just like me, myself and I figuring it out,” she added.

While the musical is playing in the 500-seat E. Turner Stump Theatre, Parsons and Moauro wrote the one-act script with no intermission for a smaller setting where the audience are immersed in the show.

“We really want the audience to feel like they’re part of the journey that these characters in the subway train are going through,” Moauro said.

But the pandemic has brought a set of challenges to live theatre. Terri Kent said the audience will be masked and no one will be seated in the first two rows.

“This developmental staging, is again, we’ve never seen it on its feet,” Moauro said. “We haven’t seen it with costumes or lighting, [and] we don’t know if parts of the show are gonna work.”

He said they might submit the musical to more theatre festivals after its debut at Kent State.

Chaining Zero is now playing at E. Turner Stump Theatre through Sunday Nov. 14. It was written to include characters from various backgrounds and bring them together in a life altering circumstance while riding the subway in New York City.

“The story itself is really indicative of our world today,” Kent said.

Kelly Krabill is an assigning editor. Contact her at [email protected]