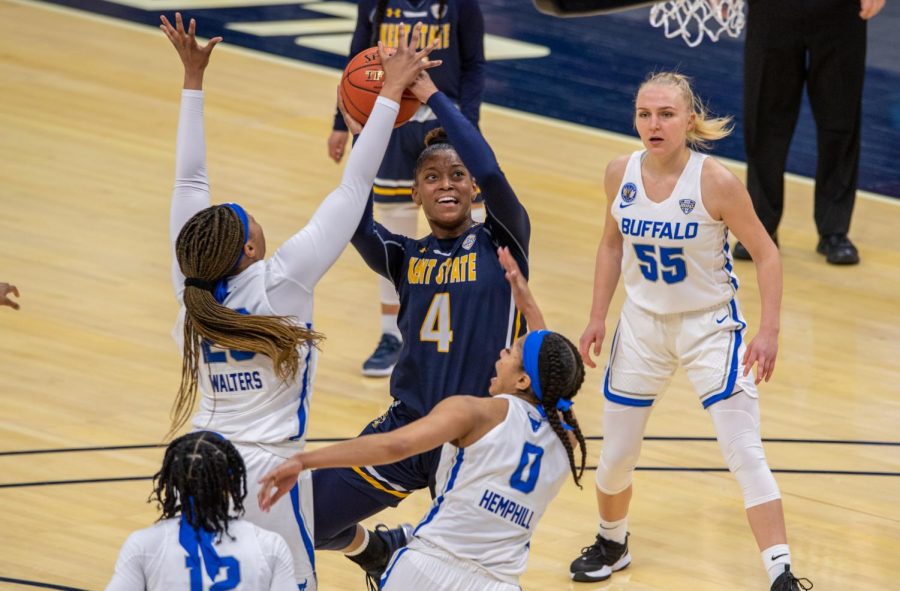 Sophomore Nila Blackford (4) fights through a sea of Buffalo defenders to get to the basket. Blackford would have a 12 point, 18 rebound double-double, but Kent State lost 73-66 and was eliminated from the MAC tournament. March 10, 2021.

The Flashes have 10 returning members on its 15 person roster which brings valuable returning experience to the team.

“We’ve been very fortunate to have a lot of good players back in the fold,” coach Todd Starkey said. “Obviously, we’ve been enjoying that, and it makes practice go a lot smoother when everybody knows your terminology and the flow of how things go on a day-to-day basis.”

“We have a lot of experience, but so does everybody else,” Starkey said. “Just because you have experience back or starters back doesn’t mean you’re going to have the same level of success. Every season writes its own story. So we have to prepare for this season, this unique season for what it is.”

The Flashes were picked to finish fourth in the MAC Preseason Coaches Poll with Blackford picked to once again be on the All-MAC Second Team.

“You could use the coaches poll however you want to,” Starkey said. “Everybody could feel slighted if you’re not picked number one for some reason and if you’re number one, then you use that to your advantage. I have a tremendous amount of respect for all the coaches in the league, and it’s just a brutal league. You go play on the road anywhere in the league and anybody can beat anybody on any given night and that’s because the quality of coaching is phenomenal.”

“Nila’s an exceptional talent,” Starkey said. “As only a second year player last year, a lot of people didn’t realize Nila averaged a double-double last year and she was in COVID quarantine for over two weeks twice during the season last year. So what she was able to work her way through just battling that stuff was exceptional.”

“We don’t have any 20 point scorers on our team, so I think the balance piece of that with Lindsey [Thall], Katie [Shumate] and Nila [Blackford] is where our strength has kind of lied with having multiple players be able to be your leading scorer on any given night,” Starkey said. “Just a well-rounded, balanced, adaptable team that we like to try and develop and then we’ll see how it matches up in the non-conference to get a gauge on where we are.”

“They were our two freshmen last year and, as coaches would probably agree that all freshmen last year, what a crazy experience to enter into college basketball with and those two handled it pretty well,” Starkey said. “We expect both of those players to play key roles this year, if not increased. They’re a lot of fun to coach and bring obviously different things to the game. But both have continued to develop and we’re excited to see how they mature even more this year.”

The Flashes have five new faces on the team this year in one senior transfer and four freshmen. Senior guard Abby Ogle is a transfer student from West Virginia University.

“Abby transferred here from West Virginia and was a junior college All-American from Kansas at Hutchinson Junior College,” Starkey said. “Somebody we recruited pretty heavily. We’re excited. She’s been battling a little bit of an injury bug here early but has done some really good things. I think she has the ability, with her experience of playing against high level athletes, of playing with confidence. She’s one of our best passers from day one, is a really good transition player and brings a lot of energy to the equation. It’s nice to have an experienced player like that.”

“Our four freshmen are all at different phases of their development and availability with some injuries,” Starkey said. “We had two players that came in with ACL’s from their senior year that are at different points in their development. But early on, Bridget Dunn and Jenna Batsch have both established themselves and I think are going to be good rotation players and kind of see how they continue to develop.”

Kent State finished fifth in the MAC in the COVID-19 altered season with an overall record of 11-9 and a 10-6 conference record. The team earned the fifth seed in the conference tournament in Cleveland, but fell to fourth seeded Buffalo in the tournament’s quarterfinals game. The Flashes had five straight games canceled in the month of January due to COVID-19 protocols.

“It’s been well-documented and well-said just how crazy this past year was, and my focus as a head coach changed a lot in the way we went about things last year in just really trying to focus on their mental and physical well-being,” Starkey said. “Not that it’s not that way every year, but [the pandemic] just magnified things tenfold with everything with COVID. We just wanted to make sure our players were in a happy and healthy place on a day-to-day basis, and we weathered that storm and I think we grew from it.”

Starkey is looking forward to playing in front of the Kent State fan base again. The team has not been able to play in front of a full crowd in the Memorial Athletic Convocation Center since March 4, 2019.

“Our fan base has continued to grow in the five years I’ve been here and last year obviously it came to a screeching halt,” Starkey said. “I think [the fans] are all excited to get back in. I’ve heard a lot of comments, and I think our season tickets are at an all time high in the last five years at least. I really feel like we’re getting back to a lot of the tradition that was established before I got here with some of the great teams from Kent State in the past. We’ve been working hard to make our alumni and fans proud, and we’re excited to have them back in the building. Our players will be excited to have them there as well.”

The team’s first home game is on Sunday, Nov. 14 at 2 p.m. against Saint Francis University. Kent State’s first game of the season is on Nov. 10 at 7 p.m. against Northern Kentucky University in Highland Heights, Kentucky.