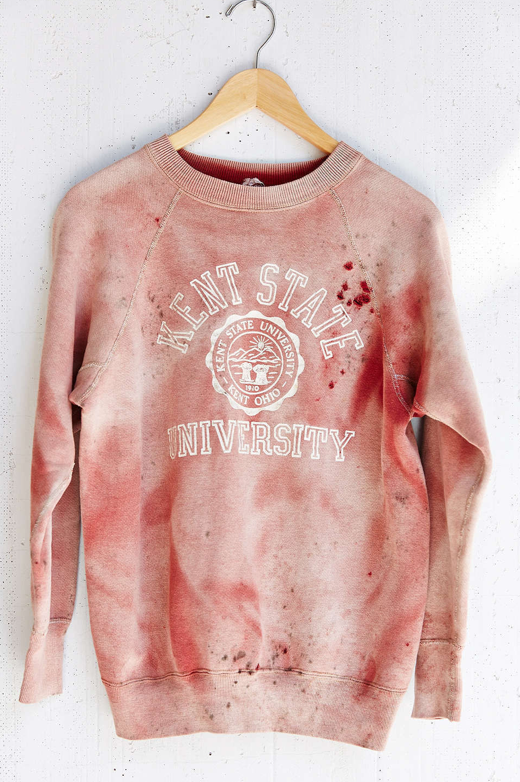 Jerry Lewis, a professor emeritus of sociology at Kent State, witnessed the shootings on May 4, 1970 at Kent State’s campus, and had one question for clothing company Urban Outfitters on Monday.

“How could somebody be so insensitive?” he asked while at the May 4 Visitors Center. “Even if you don’t know the parents like I do or you don’t know the wounded students, 13 people were shot protesting, legally protesting. (That) should be enough to make you outraged by the sweatshirt.”

Urban Outfitters sold a red-stained vintage Kent State sweatshirt on its website Monday morning that sparked controversy and garnered national attention on news sites and social media because it was reminiscent of bloodstains.

Many connected the sweatshirt with the events of May 4, when four students were killed by the National Guard while protesting the Vietnam War near Taylor Hall.

“I was just appalled,” said Marvin Logan, president of Undergraduate Student Government. “As a member who represents the entire student population, I felt for our community. May 4 is a sensitive topic. It’s a part of our legacy and should not be taken lightly.”

Urban Outfitters sold only one of these sweatshirts through its vintage line, which Buzzfeed found in a search on the company’s website early Monday morning. The sweatshirt, which Urban Outfitters sold for $129, was subsequently being sold on eBay at a starting bid of $550, or at a buy-it-now price of $2,500. It was later taken down. Bloomberg news said eBay told the seller that the item had to be removed based on a policy stating items could not be sold related to disasters and tragedies.

The company issued an exclusive apology to Kent State students expressing its remorse for the Vintage Kent State sweatshirt.

“Urban Outfitters would like to extend our sincerest apologies to Kent State University and the Kent State community. We are deeply saddened by the recent uproar our Vintage Kent State sweatshirt has caused,” Crystal Carroll, a spokesperson for Urban Outfitters said in an email. “Though it was never our intention to offend anyone, we understand how the item could have been perceived negatively.”

The sweatshirt, which is in a faded red color, had splotches of red that initially looks like blood. Urban Outfitters purchased the “one-of-a-kind” sweatshirt from the Rose Bowl Flea Market as a part of its sun-faded vintage collection. The discoloration on the sweatshirt that is being mistaken for blood came from the sweatshirt’s natural fading and sun exposure, Carroll said.

“This truth does not excuse us from our failure to identify potential controversial products head on,” Carroll said. “We, as a company who caters to a college-age demographic, have a responsibility to uphold to our customers.”

Kent State said in a press release that the sweatshirt is “beyond poor taste and trivializes a loss of life that still hurts the Kent State community today.”

“May 4, 1970, was a watershed moment for the country and especially the Kent State family,” the press release said. “We lost four students that day while nine others were wounded and countless others were changed forever.”

Mindi Farmer, director of the May 4 Visitor’s Center, said the center is using the sweatshirt controversy to educate people about the events of May 4.

Students are encouraged to visit the center to learn more about the history of May 4.

The red-stained sweatshirt isn’t the only controversial piece of clothing to land Urban Outfitters in the news or under public scrutiny. The clothing company has a track record of offending multiple racial, ethnic and awareness groups dating back more than ten years.

“Given our history of controversial issues, we understand how our sincerity may be questioned,” Carroll said. “We can only prove our commitment to improving our product-screening process through our actions and by holding ourselves accountable.”

USA Today reported in October 2003 that Urban Outfitters released a board game satirizing Monopoly. The article read, “Black leaders are outraged over a new board game called ‘Ghettopoly’ that has ‘playas’ acting like pimps and game cards reading, ‘You got yo whole neighborhood addicted to crack. Collect $50.’”

The Washington Post summarized a few of Urban Outfitter’s most controversial marketing decisions, which include a T-shirt reading “Everyone Loves a Jewish Girl” surrounded by dollar signs and a line of “Navajo” clothing and accessories that infringed on a copyright held by the Navajo Nation.

“I also think (Urban Outfitters) likes to spark controversy,” said Victor Garcia, a junior fashion merchandising major. “They have other controversial products that create hype and buzz for them so maybe any press is good press for them.”

Garcia said he didn’t think the sweatshirt was intended to hurt anyone but might have been poorly designed.

“Knowing what Urban Outfitters does and how they design, each product is a little bit different, and I feel that the picture they showed was one that looks like there may be foul play involved in some way, “ Garcia said.