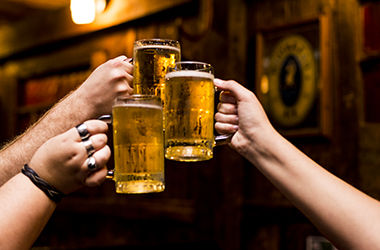 October marks the 204th anniversary of the celebration of Oktoberfest in Munich, Germany. Saturday also makes for the first downtown Kent Oktoberfest in almost two decades.

The German-American festival, hosted by Main Street Kent, will take place from noon to 10 p.m. Saturday, Oct. 4 with food and drink specials from select downtown restaurants running all weekend. Main Street Kent will be handing out 500 collectible mugs to festival goers, to encourage more Bavarian celebration after the weekend passes.

What first began in 1810 as an honorable ceremony to Crown Prince Ludwig and the Princess Therese of Saxe-Hildburghausen, Oktoberfest stayed inside the German borders until the 20th century. After a hiatus, due to WWI and WWII, Oktoberfest became a global phenomenon in the 1960s. Today, we can find guys in Lederhosen and girls in Dirndl, traditional Bavarian attire, dancing with foamy beer mugs all across the United States, downtown Kent included.

Ray’s Place — in addition to its weekend-long specials including bratwurst sandwiches, pork schnitzel and German potato salad — will be featuring a variety of German beers on tap. The Pufferbelly, which already has its annual German homage, plans to serve up potato cakes and German strudel. Because Oktoberfest is nothing without beer, the Pufferbelly will also be serving bottled Great Lakes Oktoberfest and Warsteiner on its specials list.

In addition to in-house specials, Main Street Kent, in partnership with the Kent Jaycees, will be setting up beer tents donning the traditional blue and white colors. Along with the expected mass pouring of beer — 6.7 million liters were poured worldwide last year — Kent’s Oktoberfest adds to an annual 200-year long promotion of German culture.

“We try and engage all kinds of cultures because we know that Kent is a very international city,” said Ryan Tipton, a member of the Kent Jaycees. “And German culture is just one of those cultures that’s fun to celebrate.”

Of course, Oktoberfest is not sehr gut — very good — without music.

Traditional German oom-pah and dance groups will be performing downtown all day Saturday, beginning with the Doppel Adler Bavarian Brass Band, which specializes in German Volkstümliche Musik. The Youth Dancers, of the German Family Society of Akron, will be dancing to polka and waltz, the girls lifting up the skirts of their Dirndls. The Twistoffs, Roger Hoover and the Hunt, and Cafe ‘80s will be finishing off the night with folk and rock.

Schüss!, see you there. And don’t forget to bring your Alpine hat.