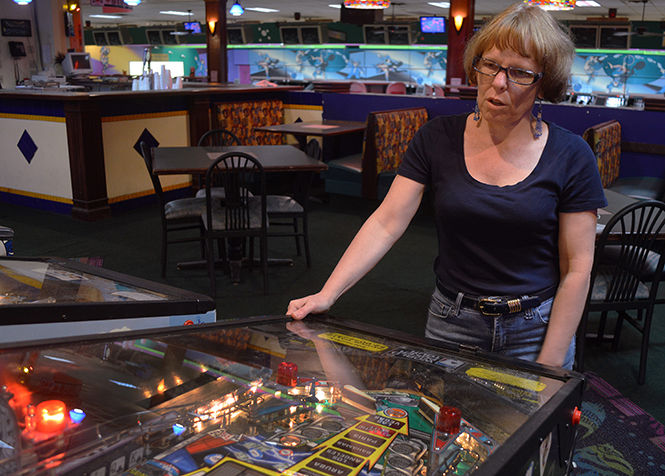 Jessie Carduner inserts a dollar into the Indiana Jones pinball machine. She stands up to her full 4 feet 10 inches — plus a few inches with her chunky black heels she uses to see the game better — and rests her hands on either side of the machine.

Lights on the board begin to flash and the famous Indiana Jones theme music plays. She narrows her eyes in concentration and anticipation.

Pulling back the plunger—the spring-loaded rod used to launch the pinball into the playing area — she places her hands on either sides of the machine. The game begins.

Carduner is a Kent State Spanish professor and undergraduate adviser who’s been playing pinball since 1980, when a friend took her to an arcade and introduced her to it. She came in 30th at the Ohio State Pinball Championship earlier this year and is one of the loyal players who is bringing pinball back to the forefront after a slump during the late ‘80s.

“Once you’re into it, once you play and you’re into it, you’re just hooked,” said Carduner, who was featured in a Wall Street Journal article published Sept. 10 about the resurgence of pinball. “There’s things about the game that are really addicting.”

Jody Dankberg, director of marketing and licensing for Stern Pinball (one of the only remaining manufacturers of pinball machines today) said pinball’s renaissance has spawned an era when players are interested again in new machines, new software and international rankings, making it more competitive.

“It’s fun, seeing this really cool (resurgance),” Dankberg said in a telephone interview from Stern Pinball’s offices in Melrose Park, Ill. “People who have never really played pinball are playing now, and people who grew up with it are playing again and collecting now.”

The resurgence comes after a dead spell in the pinball world that lasted about 20 years.

“In the ‘80s, there were places like this all over the place,” Carduner said, surrounded by the lights and sounds of 20 or so pinball machines at Stonehedge Family Fun Center in Cuyahoga Falls. “But there was a dry spell for a decade where nothing was really around. We still looked. There were about 10 years where you just couldn’t find working games anywhere.”

Dankberg said pinball was extremely popular in the 1970s but faded from popularity in the 1980s and 1990s as video games became more popular.

“In the 1970s, as far as entertainment on the street, pinball was it,” he said. “When the video game craze hit in the early ‘80s, it kind of displaced pinball a little bit. Then home consoles came, and in the ‘90s they got even better.”

Competition between pinball and other technology is continuing today because of smartphones and tablets, Dankberg said.

“Now there’s a lot of competition from mobile devices in the last 10 years,” he said. “There are so many forms of entertainment.”

For Carduner, pinball is her central form of entertainment.

Carduner moves around a lot when she plays, shifting from one foot to another, kicking her foot out when she is trying to make a particularly difficult shot and twisting her body back and forth. She calls it her “disco dance.”

“I’m always in constant motion, and that’s actually something I’m trying to work on,” she said.

Carduner, a member of the Stonehedge Pinball League in Akron (which she helps run) and Kidforce Collectibles in Berea, estimated she plays about 20 hours a week during the school year. She said during the summer, when she has more free time, she plays between 30 and 60 hours a week.

An average games lasts around 20 minutes, but she said she’s spent up to an hour on one game.

“I always get quarters, no matter what, and sometimes I find out my purse is really heavy, and turns out I’ve got $30 in quarters,” she said.

Carduner said it’s worth it.

One addictive aspect of the game is it’s a challenging sport, she said.

“For me, being female and small, it’s a sport that I can do,” she said. “Obviously, I can’t do basketball. It’s very physical for me and also mental, so it’s a sport to me. You definitely get an adrenaline rush playing and making shots.”

Josh Sharpe, president of the International Flipper Pinball Association, said Carduner is just one specific example of how pinball has become more popular over the last 10 years.

He said that when he first acquired the company in 2006, the World Pinball Player Rankings was only made up of about 500 players.

“The goal of our organization was maybe to get to 1,000 players and double our numbers,” he said in a telephone interview from IFPA’s headquarters in New York City.

The most recent numbers put the total of ranked players at about 27,000, from more than 40 countries all over the world.

The rankings list was one thing that brought pinball back from the edge of extinction, said Carduner, who goes by JES on the list.

“It’s an amazing community now,” she said. “The Internet has helped us connect to each other, so besides the games, the friendships that go with it now (keep players coming back).”

Carduner’s main competition is Tommy Bizzi, a pinball player from Strongsville and fellow Stonehedge Pinball League member who goes by BEZ on the rankings list.

Carduner comes in at 1,199 on the list (as of Sept. 14), but she said she doesn’t really mind she’s not farther up because, as a college professor, she doesn’t have the time and money necessary to move up the ranks.

“I sort of believe in the rankings and sort of don’t,” she said. “I never let pinball interfere with my work. The more tournaments you can play in, the better your odds are of increasing your ranking.”

These rankings are determined by how well players do in the nearly 2,000 pinball tournaments a year hosted all over the world, up from 50 competitions held in 2006, Sharpe said.

Sharpe said IFPA’s mission is to bring more attention to pinball, which he calls “a competitive sport.”

“It’s about promoting exposure,” he said. “There’s a lot of these underground semi-sports, like competitive eating, and our goal is to bring corporate sponsorship and media attention to it.”

Many people only play pinball casually, but for more serious players like Carduner, there are tricks to increase the player’s score and keep the ball in play longer.

Carduner is the self-proclaimed “queen of nudging,” which involves shaking the whole machine to keep the ball from falling down the inside lanes by the flippers, the paddles the player uses to hit the pinball.

“I shake the machines quite a bit more than other people do,” she said.

However, these moves can sometimes be costly for players, ending in slide-saves or slam-tilts, which cause the machine to shut down and the player to lose the game.

Each game has its own tricks and quirks, and Carduner has her favorites, which include Arabian Nights, Terminator 3, Attack from Mars, and her personal favorite, the Addams Family.

She said she likes these games the best because they are the most challenging.

Other games, like the Indiana Jones game she started with, are much easier.

But , whether she’s playing Indiana Jones, Metallica or another game at Stonehedge, she knows what she has to do to rack up more points or get more pinballs in play at a time.

Putting all the tricks, rankings and money aside, it comes down to hitting a steel ball that weighs 2.8 ounces on different targets to rack up points, and she said that’s the most exciting part.

“It’s just such a thrill,” she said, her eyes shining. “This little target — if you see how small that is, it’s just amazing to hit it. There’s no feeling (like it) in the world. (Using) that little ball, you have to hit it perfectly. That’s what we really like about it: making the perfect shot.”