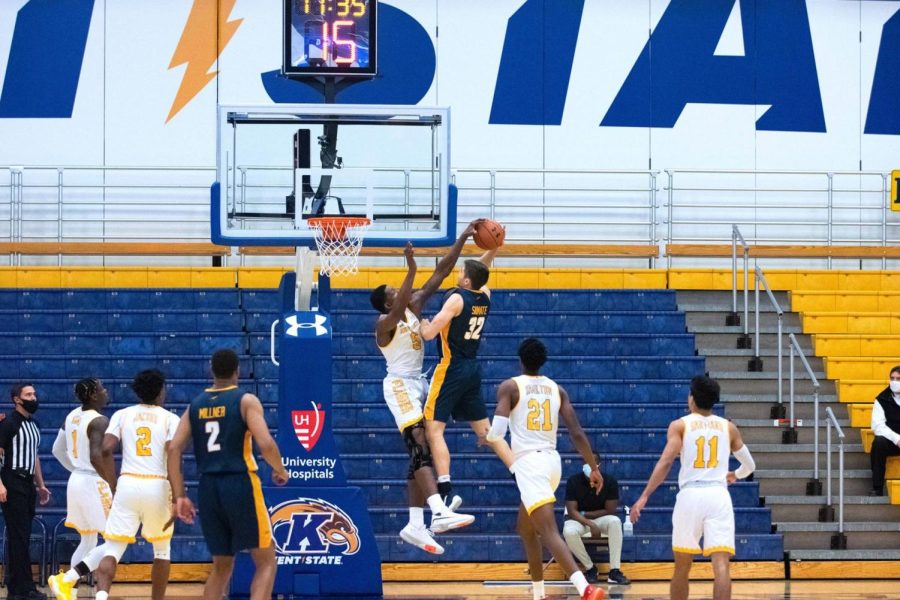 Senior forward Danny Pippen goes up for a block against the University of Toledo. Despite Pippen's career high 34 points, the Flashes would lose 84-84 at home. Jan. 5, 2020.

Despite another strong first half performance the Kent State men’s basketball team once again failed to close out a tightly contested conference game.

The University of Toledo defeated Kent State 84-82, dropping the Flashes to 0-2 in Mid-American Conference play.

But, following a go ahead bucket by Ryan Rollins of Toledo with 13 seconds left Pippen was unable to respond, missing an off balance three on the next possession that would have put the Flashes ahead.

“Obviously disappointed how it ended,” head coach Rob Senderoff said. “[Toledo is] good but that’s one were we have to find a way to win.”

As Kent State’s only returning double-digit scorer, Pippen has been a crucial component to the Flashes’ success.

Senderoff said after the game he didn’t even expect Pippen would play in this game after missing two days of practice this week.

This was a meeting between the first and second ranked defenses in the MAC, but the the game started with offensive fireworks.

Toledo guard Spencer Littleson hit three straight three pointers to open the game. Danny Pippen stopped the bleeding with a bucket making the score 8-12 going into a timeout. As time expired in the first half Danny Pippen hit a three himself to give the Flashes a 44-38 halftime lead.

At one point Kent had a 59-50 lead. But due to turnovers and the scoring of Senior guard Marreon Jackson of Toledo, who had 22 points, the Rockets were able to escape the M.A.C. Center with a win.

In the second half senior Temple transfer Justyn Hamilton continued the rebounding dominance he has had for Kent by coming out with four straight boards, including one that set up senior guard Mike Nuga for a key three. Nuga finished with 18 points, and Hamilton had 6 points and 11 rebounds.

Sophomore guard Giovanni Santiago finished 3-5 from behind the arch, his only points on the day.

Senderoff said after the game that turnovers late in the game have caused his team to fall to 0-2 in conference play.

“We gotta get more stops late,” he said. “We got the ball inside and on top of the basket. We did well on the glass. We knew it was gonna be one of those games where we had to play for 40 minutes. We had nine turnovers in the second half, and we got to grow and get better from that.”

Freshman Ryan Rollins for Toledo finished with 13 points, and had the go ahead bucket that ultimately won the game for Toledo.

“A loose ball went into his hands, and he is a good young player,” Senderoff said. “We screwed up defensively, one of his late game shots was on a rotation we shouldn’t have had.

Kent State is now 3-3 (0-2 MAC) and there are many questions for this team moving forward. After taking defending national champion the University of Virginia to overtime in the second game of the season and entering MAC play at 3-1, the Flashes have lost two straight close games.

“Two tough losses for sure, but a lot of season left,” Senderoff said. “We gotta bounce back obviously on Saturday.”

Toledo improves to 9-3 (4-0 MAC) and extends its winning streak to six games.

Kent will continue to chase its first MAC win this Saturday, Jan. 9 against Western Michigan at the M.A.C. Center. The Broncos are 2-6 (1-3 MAC) and are also coming off a home loss to Toledo.

Dante is a sports reporter. Contact him at [email protected]