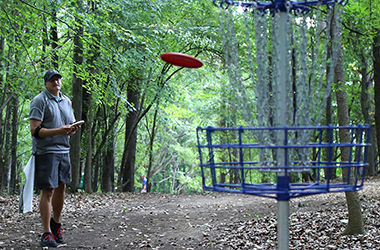 On Hole 10 of the Kent State disc golf course, Akron native Chue Vue lines up his stance for his first drive of the Flash Drive Open. With a sideways flick, Vue sends his disc wavering high and low throughout the trees, missing hanging vines and thick trunks. He looks back after a branch smacks it down.

“Sometimes you’re going to really have that up and down kind of game,” he said.

Vue played alongside 24 Kent State students on the first official disc golf tournament hosted at the university. Partnered with the KSU Flash-a-Thon, the Department of Recreational Services at the Student Recreation and Wellness Center hosted “amateur” players to help raise money for the Akron Children’s Hospital. The tournament also was a red-ribbon cutting, blast-off event to mark the opening of a course two years in the making.

Located to the south of Campus Center Drive and the University Prairie Grass Preserve, the course itself stretches a half-mile from Summit Street to the west end of the Allerton Apartment Complex. It presents hilly terrain, high prairie grass and dense woods.Its longest hole — a 542-foot par 5 – has all three.      Kimberly Rufra, the associate director of the Department of Recreational Services and the head program designer behind the course, said that there was a reason a lot of thought went into its layout.

“There are some things that you won’t find at another course around here,” she said. “Which may make it difficult for some.”

That was part of Rufra’s plan, back when the idea first came about in fall 2012. Eager to respond to Kent’s growing culture of disc sports, Rufra pitched the course plan to designers, including Tom Euclide, associate vice president of Facilities Planning and Operations, and project designer Bill Griffith. The following year, planning for construction was unfortunately delayed, and Rufra was told that disc golf “was not a priority” as far as Rec center projects went. A tournament was originally planned for April, but it had to be cancelled as construction hadn’t gotten off the ground.

This summer, the course started to come together. Along with the help of Professional Disc Golf Association member Dan Kilgore, Rufra and her team began the tedious process of shaping the course outline, plotting the tee mats, sawing off any potential “widowmakers” in the woods. Although the course has been open to the public for a few weeks, Rufra said that this past Sunday marked a point in time when Kent State officially ushered in disc golf as a recognized sport. She and her team hope that this sends a shockwave to university students.

“What we hoped that the building of this course would do was to encourage a sort of community at Kent State,” Rufra said. “And if anything else, it’s free to play.”

But a disc sports community isn’t anything new to Kent.

Along with the sport’s more-so competitive cousin, ultimate Frisbee — where two teams face each other on a playing field similar to soccer or football ­­— disc golf has been a sport familiar to college students since the mid-to-late 1970s. The formation of the Disc Golf Association and the PDGA, gave rise to structure and rules for a sport once only seen as a counterculturist hobby. Today, the Kent State Ultimate team — better known as “Damn Gravity” — is sort of the nucleus of disc culture, with its close-knit camaraderie, spaghetti dinners and frequent statewide tournament excursions. Last spring, the team reached a top spot in the Northeast regionals of the USA National Ultimate Tournament. It was the first time they’ve done such in more than a decade.

The current captain of the team, Adnan Raslan, said that he’s excited to be taking Damn Gravity to Buffalo, New York and Case Western University for tournaments, just as he’s pumped to practice his throws on the new course. Because there’s a “correlation” between the two, Kaslan believes the addition of a professionally-made course will improve its misguided image as a “fake sport” — or that it even is one to begin with.

“Some people don’t even know what Ultimate Frisbee is,” Raslan said. “They say, ‘Oh, I have one of those courses by my house’” and confuse it with disc golf.

Silas Chao, senior integrated science major, has been a member of the Kent State Ultimate Team since he joined the group last year. Chao, who’s from Dublin, Ohio, said that he’s excited to practice his putts on a course much closer to his current home than before — the closest being in Hudson. The “pulls” and underhand flicks from Ultimate practice, he said, transition well from the Centennial fields to the disc golf course.

Yet, this doesn’t mean 18-holes is the same ballgame.

“You think it would be easy,” Chao said. “throwing a disc into net. But it’s really not.”

Other than playing by strict PDGA rules — and obeying the sometimes-ignored disc etiquette — players in Sunday’s “amateur-only” tournament proved that competitors must consider taking the sport serious if they hope to shoot somewhere close to par. It’s why many like Kilgore or Chue take sizeable backpacks and rollable carts stuffed with every type of disc one would need on the course, from apple-sized markers to weighty drivers. Some players play fine with less.

“You have the culture of disc golf,” Louie Kiskowski, geography grad student and self-professed “amateur” disc golfer said. “and then you have guys that are just absolutely crazy about it.”

Kiskowski, who was a participant in the Sunday’s tournament, said that although he admires the “hardcore” disc golfers, he’s fine with keeping the sport a weekend hobby. As far as culture goes, he believes that his lack thereof is best represented by his humble two-disc repertoire.

“They’re all I need,” Kiskowski said. “I fear that if I carry any more, I’m going to lose them.”

As disc sports increase even more in popularity, Rufra hopes the local scene becomes even stronger this year. She aims to see a Disc Golf club sprouting up in the near future, now that Kent State has its own home course, and also a Disc Golf 101 class for “amateurs” like Kiskowski. But even after more than a year’s worth of practice doesn’t keep one from throwing stray discs.