National Guard one of only similarities between Ferguson and May 4 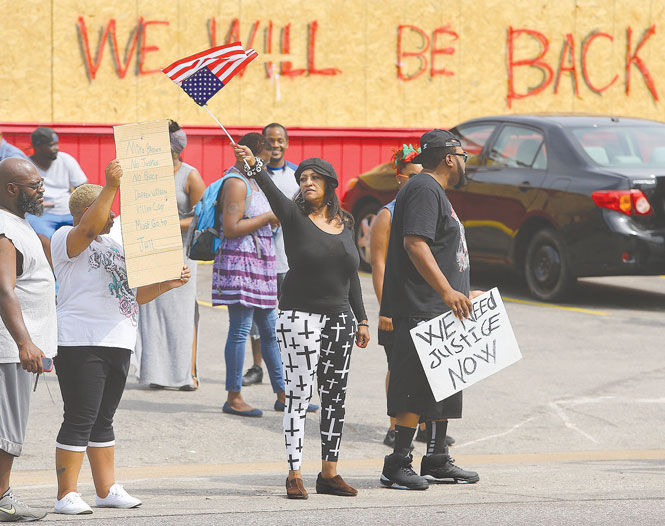 A demonstrator waves an upside down American flag in front of a boarded up store on West Florissant Avenue on Wednesday, August 20, 2014, in Ferguson, Mo.

When the National Guard was brought in to quell rioting in Ferguson, Missouri, some critics began to compare the turbulence there to Kent State’s May 4, 1970 shooting.

The city of Ferguson, Missouri has been in turmoil since Aug. 9, when a white police officer shot and killed an unarmed black teenager.

Missouri Governor Jay Nixon called on the state’s National Guard to attempt to restore calm in the working-class suburb of St. Louis before withdrawing them Thursday.

However, Kent State sociology professor and May 4 expert Jerry M. Lewis said while there are a few similarities between the two incidents, he thinks it’s a stretch to compare them.

“I thought they were similar [at first], I must admit, but except for the National Guard, there are not a lot of similarities,” he said. “There are mainly differences.”

Lewis said a glaring difference is no one has been killed in the protests in Ferguson.

The obvious similarity is the presence of the National Guard and a heavily armed police presence in both instances.

However, Lewis said another similarity is the initial incident leading to the protest of a larger issue.

Although Ferguson and May 4 might not bear many resemblances, they share one common thread: a tragedy drawing national attention.

The town of 21,000 has been host to protesters and reporters from across the country, leading to at least 155 arrests.

In the days since Brown’s death, Matthew Thompson, former director of student relations for Kent State Black United Students, said although he cannot speak on behalf of BUS, he believes people both in Ferguson and those following the story have lost what he said is the focus: the death of an 18-year-old man.

“I have had conversation[s] with people and some want to focus on the riots, but what about the young man that was killed?” he said. “The narrative behind this story is painting Michael Brown as a deserving criminal and the afflicted as irrational. The truth is they are trying to survive, trying to send a message that we will not stand for these injustices any longer.”

Leia Belt, former director of community affairs for BUS, said the events in Ferguson have left her scared.

“As a young African-American woman, is it uneasy to see a young African-American man, whose life is no different from my own, slain unjustifiably and abandoned by those we have entrusted the responsibility of protection,” she said. “It concerns me that the overwhelming presence of fear due to an individual’s pigmentation gives someone [the] right [to] strip an individual of their most sacred possession, life.”

Over the last few days, protests in Ferguson have appeared to calm, after Nixon forced the National Guard to withdraw and riots cooled down to peaceful protests. However, protesters are still waiting for final autopsy results and an official investigation.