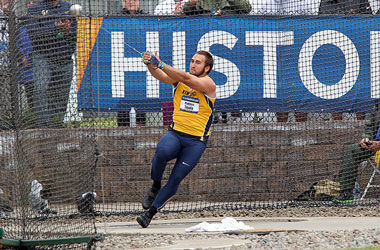 It’s hard to believe there was once a time when 2014 NCAA Division I National Champion Matthias Tayala didn’t throw the hammer.

The fourth-year hammer-thrower was crowned champ at the National Outdoor Championships this summer, but Tayala wasn’t always as well-versed in his best event as he is now.

In light of Tayala’s successful track and field career, which includes a national title in his junior season, first-team All-American honors and three school records in three different throwing events, it’s even harder to believe that Tayala didn’t consider participating in collegiate track and field at one point.

Tayala originally attended John F. Kennedy High School in Warren, Ohio, because at the time, he was dead set on playing football in college.

Tayala eventually transferred to McDonald during his sophomore year, and it took him until his junior year to figure out that track and field was where he truly belonged.

McDonald and its program has groomed track athletes who have gone on to compete at the collegiate level. Tayala is a product of the small town’s tradition.

“McDonald has a really good track program,” Tayala said. “We got a lot of kids going and doing it after high school, which I think is a good thing for kids to do, especially if they have the talent.”

Tayala said his father, Steve, who served as a throwing coach and mentor for Tayala in both middle and high school, realized his son’s potential and pushed him to pursue track and field.

“He told me when I was a junior, hammer would be my event, even though I never did it before,” Tayala said. “He said I had the body for it and the athleticism to throw the hammer farther than the shot and the disc.”

When Kent State track and field head coach Bill Lawson and throwing coach Nathan Fanger paid Tayala and his family a visit for recruiting purposes, Steve told Lawson that his son’s event in college would be the hammer, and he could envision Tayala throwing more than 240 feet some day.

“Lawson kind of looked at my dad funny and didn’t say much, just kind of shrugged it off like, ‘Oh yeah, sure,’” Tayala said.

Steve’s premonition might have seemed improbable at the time, but at the national meet, Tayala exceeded his father’s expectations by throwing the hammer 241 feet, four inches, breaking his own school record and claiming a national crown in the process.

After Tayala won the national championship, Steve walked up to Lawson to give him the classic “I-told-you-so” speech, but Lawson deflected the jab in probably the best way he could.

Lawson said he never lacked confidence in Tayala’s abilities, not even when he met him four years ago at Tayala’s home in McDonald. He just wanted to keep Tayala’s expectations grounded and his goals realistic.

“I wanted to give him a realistic compass,” Lawson said. “We always thought Matthias would achieve to a high level, but we don’t want people to be disappointed, so we were optimistically cautious. (The day Matthias won the national title) was a magical day where he was not only gifted enough, but he was well coached and the stars lined up and he got it done, and we were obviously very excited and proud.”

Whether or not Tayala’s success was star-crossed or formulated in the haze of Steve’s surprisingly accurate crystal ball, all the work, time and dedication he and Fanger have put in over the past three years has certainly paid off, and Tayala is now reaping the rewards.

“When you look at his size, he’s not the mold of a world-class shot-putter or even that of a discus-thrower, he’s just very good in those events, but he has the body type for the hammer,” Lawson said. “The ability was there — it just had to be harnessed.”

Tayala threw discus and shot put all through high school at McDonald but never picked up a hammer until his freshman year at Kent State three years ago.

“Discus was my favorite event, but hammer is definitely the favorite now obviously because it’s my best event,” Tayala said.

The hammer can travel a lot further than a shot or a disc, and the technique behind throwing it allows Matthias to spin a lot faster.

“You really try to test yourself a lot, trying to go faster every day and feeling that momentum you can actually build on a 16-pound hammer, it just something else,” Tayala said. “With the disc and shot, you can only move so fast. It’s nothing like doing four turns with a hammer where you can really build speed.”

Just as Tayala’s speed has picked up over the years, so has his skill. From his first season, when he could only throw the hammer 198 feet, eight inches, to national championship-caliber throw, Tayala has gotten progressively better year after year under Fanger’s tutelage.

Just when it looks as though Tayala can’t throw the hammer any farther, he surprises everyone.

“Throwing events are maturation events where you’re going to get better as accumulate strength and technique over time,” Lawson said. “It took (Matthias) and coach Fanger a couple of years to get on the same page, believe each other, and that’s why we’re seeing the big results.”

In a sport like track and field, all meets before the national tournament are just practice — the national meet is where it really counts. As per usual for Tayala, he’ll save his best throw for last.

“The only meet that really means anything is the national meet, and my goal is to throw far at the national meet,” Tayala said. “I want to throw big in big meets, that was my biggest thing I really thought about (last) year, and I want to do the same thing (this) year.”